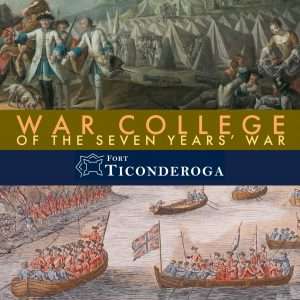 The Seven Years’ War (1756–1763) was a global conflict, largely between Great Britain and France, although involving other European powers as well. The conflict in North America began in 1754 at the beginning of what became known in the United States as the French and Indian War (1754–1763), which ended in France’s defeat as a land power.

Fort Ticonderoga is seeking new research and perspectives of one of the most important military and political events of the 18th century before the America Revolution, covering a diverse range of topics and perspectives from across the global conflict. Paper proposals are welcome from established scholars in addition to graduate students, museum professionals, and others that relate to the origins, conduct, and repercussions of the Seven Years’ War. Organizers are especially interested in topics and approaches that engage the international quality of the conflict as well as representing the variety of peoples and places involved.

Fort Ticonderoga welcomes interdisciplinary approaches and perspectives covering the period from the 1740s to the 1760s. Papers may include or engage:

Sessions are 30 minutes in length followed by 10 minutes for audience questions. Fort Ticonderoga may provide speakers with partial travel reimbursement. Submit a 300 word abstract and CV by email by July 31st, 2022 to Richard M. Strum, Director of Academic Programs, at rstrum@fort-ticonderoga.org.