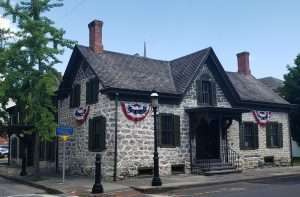 Since its founding in 1689, the British 24th regiment has been in every major conflict Britain been involved in, from the fields of Blenheim (1704), Saratoga (1777) to being the only Welsh regiment to land on D-Day (1944).

Since receiving permission by the Royal Regiment of Wales in 1995 to establish a living history organization of the 24th, everything they do comes straight from the pens of British officers, soldiers and contemporary sources, from the clothing and equipment they wear (mostly handmade) to the maneuvers they use to recreate the battles.

The Matthewis Persen House in Kingston, NY will host reenactors from the British Brigade’s 24th Regiment of Foot, who will portray soldiers of the Major’s Company of the 24th as they would have appeared on the 1777 Northern (Saratoga) Campaign during the American Revolution, on Saturday, June 25th.

From 10 am to 4 pm, reenactors will authentically portray a day in the life of a British foot soldier.

The Matthewis Persen House is located at 74 John Street in uptown Kingston, at the corner of John and Crown Streets. Admission is free and all are welcome.