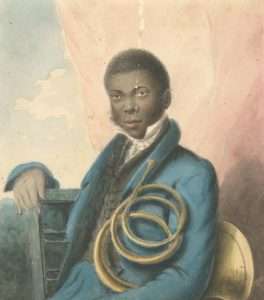 But as a black musician, Northup probably could have found acceptance in such venues, because the way had been paved by Francis “Frank” Johnson. Johnson, a black resident of Philadelphia, Pennsylvania, performed with his band during many summers at the best hotels in Saratoga.

Johnson was born June 16, 1792, but scholars disagree as to whether he was born in Philadelphia or Martinique. Johnson learned to play a number of instruments–including, like Northup, the violin – but his preferred instrument was the Kent bugle (more akin to what we know as a trumpet), and his brass band played many gigs in Philadelphia; Cape May, New Jersey; and other cities.

In the 1820s, a Philadelphia resident who was a frequent visitor to the Spa City (which was then only a village) suggested that Congress Hall hire Johnson’s band to perform there. This was probably the first time any American hotel had hired musical performers. Johnson played in Saratoga every season (except one, when he was shunned for asking for more money) from 1822 to 1843.

His connections to his summer home were solidified in 1824 when Francis was commissioned to compose music for the American tour of the Marquis de Lafayette. Among his compositions were Cotillions entitled “Saratoga”, “Ballston” and “Congress Hall.” These scores are currently on display at Brookside Museum in their new exhibit “Black Experiences in Saratoga County – 1750-1950.”

In her book, Lord, Please Don’t Take Me in August: African-Americans in Newport and Saratoga Springs, 1870-1930, Myra B. Armstead notes that Johnson’s Saratoga concerts were so popular that his performance schedule was expanded to include playing during afternoons and mornings. In August 1842, a Philadelphia newspaper printed a notice that “FRANK JOHNSON’S BAND is at Saratoga and play every morning, from 6 to 7 o’clock.” Apparently, some Saratoga visitors were early risers!

Over the years, Johnson’s band became a Saratoga institution, performing at Congress Hall, the United States Hotel, the Pavilion, and Union Hall (often alternating between venues). In early August 1839, his musicians heralded the arrival of President Martin Van Buren. Soon afterward, when local citizens rode carriages to the outskirts of the city to meet another important visitor – Henry Clay – they were accompanied by Frank Johnson’s band.

Later that month, the musicians welcomed several Troy fire companies, on an excursion to Ballston Spa (where they spent two hours visiting several springs and “reciprocating polite attentions with the citizens and visitors”) and to Saratoga Springs. As described by the Troy Daily Whig, after taking the train to Saratoga, the firefighters formed a line and, “escorted by FRANK JOHNSON’S BAND, they marched through the village to Congress Spring; thence to the Columbian Hotel, where they dined.” They then walked about, “examining whatever was curious and novel,” sampled the waters of the numerous springs, and then boarded the return train to Troy.

Johnson died in April 1844, and The Voice of Freedom, a Vermont newspaper, noted his passing in this way: “Frank Johnson – This favorably known colored musician, died of bronchitis, on Friday night, at his residence at Philadelphia.”

Johnson’s band continued to perform, however. In the summer of 1844, they took a break from Saratoga and played “Home Sweet Home” at a jubilee in Pittsfield, Massachusetts. The band continued entertaining for years afterward.

Johnson’s legacy was reflected in two ways. As a musician, the continuation of his band after his death indicated the popularity of his performances. As a composer, his published sheet music documents his creative talent. A biographical item on the University of Pennsylvania website says he was the first African American to have sheet music published, and that his efforts included “well over two hundred published pieces.”

Though Johnson was mostly known for popular music (he has been credited with originating ragtime), one of his more interesting accomplishments was composing music for a poem written by abolitionist Sarah Forten: “The Grave of the Slave.” As shown on the sheet music, the final lines of the song (which was sung at anti-slavery rallies) are:

“The grave to the weary is welcomed and blest,

And death, to the captive, is freedom and rest.”

Johnson had traveled to England in 1837 to perform at ceremonies related to Queen Victoria’s ascension to the throne and was probably the first African American performer to tour overseas. “Frank Johnson Day” was observed for some time in Saratoga, apparently as recently as 1978. Presently he is commemorated by inclusion in Brookside’s “Black Experiences” exhibit.