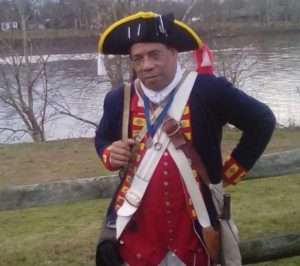 This fact, in and of itself, would not seem significant, but Ned Hector was African American, one of perhaps 5,000 African Americans who fought with the Continental Army in the War for Independence.
Although his exact birth date is unknown, it is believed that Hector was born in about 1744. Noah Lewis, a colonial re-enactor from Upper Darby, PA who travels the country presenting programs about Hector and the life of African Americans in the Revolutionary War era, says that “it is uncertain who Ned’s parents were, where they came from, or where he was born.”

In fact, Lewis notes that very little is known of Hector’s life prior to his appearance on the muster rolls of Proctor’s unit, with whom he fought in at least two major battles, at Brandywine and Germantown.

“It was at the former that a 33-year-old Ned was remembered for his heroism,” Lewis says. “We are fortunate to have a first-hand account of this battle from the area where Proctor’s artillery was located during the battle. Jacob Nagle, a young boy, son of one of George Washington’s officers, recorded the events in his diary.”

Lewis says that Hector’s unit “was positioned near Chad’s Ford, “probably on the ridge behind the John Chads House.”

“Late in the afternoon of September 11th, the British and Hessians began to overrun the American positions on the East side of the Brandywine and the order was given to abandon the guns, wagons, and horses and ‘save yourself,’” Lewis says. “Hector is reported to have said, ‘the enemy shall not have my team; I shall save my horses and myself.’

“He then grabbed up a stack of abandoned arms (he probably was unarmed), threw them in his wagon, fended off his pursuers and escaped with his wagon– the only salvage from his company. Obviously, these items were most needed by the Army in the ensuing days.”

Hector was hailed as a hero in the aftermath of the battle, while the commanding officer who had given the order to abandon the guns was court-martialed for leaving the field of battle in “an un-officer-like manner” and losing his cannon to the enemy.

Noah Lewis will be bringing Ned Hector’s story — and the stories of other African Americans during the Revolutionary War era — to Sullivan County this summer when he makes two appearances at the Fort Delaware Museum of Colonial History in Narrowsburg, first on Sunday, July 10 and then again on Saturday, August 6th.

Fort Delaware, located on the Upper Delaware Scenic Byway at 6615 Route 97 in Narrowsburg, is owned by Sullivan County, and is operated by the Barryville-based non-profit history education group, The Delaware Company.

Both programs are sponsored by Bold Gold Media, as part of the Bold Gold Media Speaker Series at the Fort. Other programs to be presented as part of that innovative series include Drew Shuptar Rayvis, who will do a program entitled, “A Disappearing Country: Algonkian Life in the Northeast 1700-1763” on Saturday, August 20th.

Vince Benedetto, president and CEO of Bold Gold Media, said he is happy to work with The Delaware Company in bringing innovative programming to the region in fulfillment of its mission to promote and support the history and historic landmarks of the Upper Delaware and beyond.

“If history is a teacher of anything, it’s that if a great civilization is to be preserved it must remember and know its past,” he said. “Along the banks of the Delaware, so much of the story of the struggle for American freedom was written. The work of The Delaware Company to bring those stories to life, and to honor the heroes who fought here, is beautiful. Bold Gold Media Group, as a veteran owned company, is grateful to them and honored to support their efforts.”