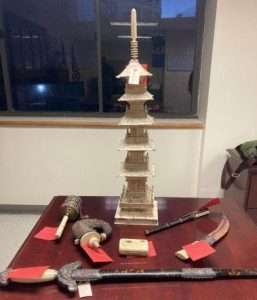 During the inspection, the Officers witnessed what appeared to be multiple elephant ivory articles on display, including a large ivory pagoda. After performing license checks and online surveillance, Investigator Harvey returned to the shop with ECO Parmelee.

Once the officers confirmed the items were available for purchase, they identified themselves and notified the owner of the investigation.

The owner agreed to sign a consent order, relinquish the pieces, and pay a fine of $21,000.

Despite being listed as threatened or endangered in the Federal Endangered Species Act since the 1970s, elephant and rhinoceros populations across Africa and Asia are moving towards extinction. These animals are being slaughtered at an alarming rate to meet demand of the ivory and rhinoceros horn trades, much of which are unlicensed and illegal. The Wildlife Conservation Society estimates that 96 elephants are slaughtered in Africa each day and onesubspecies in particular, the Central African forest elephant, faces extinction in the next decade if the current poaching rate continues.