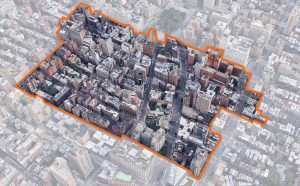 It offers a unique window into New York City‘s development in the late-19th and early-20th century, with an eclectic array of buildings, many designed by world-class American architects.

Despite its historic importance, this neighborhood is severely lacking in landmark and zoning protections.

While the New York City Landmarks Preservation Commission has cited the architectural and cultural variety of the area as a reason why the neighborhood shouldn’t be landmarked, this variety and vibrancy are precisely what make the proposed South of Union Square Historic District such a vital resource to preserve. Village Preservation has designed and led the campaign for landmark designation of the South of Union Square Historic District and the League is eager to join them in this work.

The Preservation League of New York State has included the the proposed South of Union Square Historic District on the 2022-2023 Seven to Save list.  The list highlights New York’s most endangered historic sites and the League offers listed places wider visibility, assistance with advocacy, and technical services.