In the Civil Rights Cases, the Supreme Court consolidated four challenged to the constitutionality of the Civil Rights Act. One of the cases, U.S. v. Singleton, involved the refusal by a New York theater to admit an African American patron who had purchased a ticket.

To protect citizenship rights guaranteed in Section 1 of the 14th Amendment, as authorized in Section 5, the Civil Rights Act of 1875 prohibited discrimination in public places and facilities on the basis of color, race, or “previous condition of servitude.” Because legal redress in state courts was unreliable, the Civil Rights Act mandated that lawsuits brought under the act be tried in federal courts.

Writing for an 8-1 majority, Associate Justice Joseph P. Bradley, argued that discrimination by individuals and private institutions was not covered by the 14th Amendment and could not be legislated against by Congress. Bradley, who was born in New York State, also claimed that discrimination against African Americans did not constitute a badge of inferiority rooted in slavery so it was not illegal under the 13th Amendment.

The only dissent to the decision was by Associate Justice John Marshall Harlan. Harlan responded to the majority view:

“My brethren say that when a man has emerged from slavery, and by the aid of beneficent legislation has shaken off the inseparable concomitants of that state, there must be some stage in the progress of his elevation when he takes the rank of a mere citizen, and ceases to be the special favorite of the laws, and when his rights as a citizen, or a man, are to be protected in the ordinary modes by which other men’s rights are protected. It is, I submit, scarcely just to say that the colored race has been the special favorite of the laws. What the nation, through congress, has sought to accomplish in reference to that race is, what had already been done in every state in the Union for the white race, to secure and protect rights belonging to them as freemen and citizens; nothing more. The one underlying purpose of congressional legislation has been to enable the black race to take the rank of mere citizens.”

In defense of the Reconstruction era amendments, Harlan argued:

“The opinion in these cases proceeds, as it seems to me, upon grounds entirely too narrow and artificial. The substance and spirit of the recent amendments of the constitution have been sacrificed by a subtle and ingenious verbal criticism . . . Constitutional provisions, adopted in the interest of liberty, and for the purpose of securing, through national legislation, if need be, rights inhering in a state of freedom, and belonging to American citizenship, have been so construed as to defeat the ends the people desired to accomplish, which they attempted to accomplish, and which they supposed they had accomplished by changes in their fundamental law . . . [T] court has departed from the familiar rule requiring, in the interpretation of constitutional provisions, that full effect be given to the intent with which they were adopted.”

In the United States v. Singleton, Samuel D. Singleton, a ticket-taker at the Grand Opera House in New York City was indicted for violation of the Civil Rights Act by denying entry to William R. Davis, a young African American man. The incident was reported on page 8 in the November 25, 1879 issue of the New York Times. Davis had previously sued another theater that refused to admit him, which suggests his intent was to challenge racial discrimination, not just attend a show. 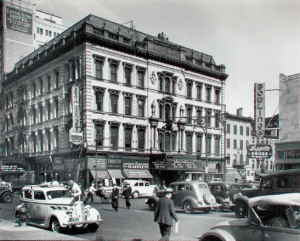 “William R. Davis, a young colored man, attempted to gain admission to the matinee performance in the Grand Opera-house last Saturday, and was excluded from the house by the ticket-taker. The result will be the prosecution, either civilly or criminally, of Messrs. Poole & Donnelly, the managers, under the Civil Rights bill. From the statement made by Davis yesterday, in consultation with Assistant United States Attorney Fiero, it appears that Davis is of full African blood, 26 years of age, and was born a slave in South Carolina. He became free under President Lincoln’s proclamation of emancipation. He is a tall, good-looking man, intelligent and educated, converses and dresses well, and is at present business agent of the Progressive American, a weekly newspaper published in this City and devoted to the interests and advancement of the colored people. Mr. Davis lives at No. 109 West Twenty-seventh-street.

“On Saturday, he wished to take a friend to the matinee, and at about 10 o’clock in the morning she went to the Grand Opera-house and bought two tickets at his request. She is a bright octoroon, almost white. She accompanied Mr. Davis to the theater, but when he offered the tickets to the door-keeper, that functionary said that the tickets were not good, and that Davis could have the money paid for them refunded, by applying at the box-office. He went to the ticket-seller and returned the tickets, but refused to accept the money back, as he began to suspect that the exclusion was on account of prejudice against his race. He went outside the Opera-house, and, calling a small-boy, asked the lad to go to the box-office and buy two tickets for him, giving the lad the purchase money, and 10 cents for his trouble. The boy got two tickets, and a moment later, Davis and his lady friend again confronted the ticket-taker.

“The lady was admitted, or was not prevented from passing, perhaps because her fair complexion deceived the door-keeper, but when Davis, two or three feet behind her, offered the tickets, the door-keeper informed him that these tickets, also, were not good. Davis said they had been bought only a few moments before at the box-office, but the ticket-taker still insisted that they were not good, and that he could have his money back. Davis replied that his companion had already been admitted, and that he must also have admission at the same time attempting to press his way through the gate. The gatekeeper took hold of him and forced him out, and called a policeman to remove him. When Davis protested the policeman told him that the managers did not admit colored people to their theater, and that he had better go away. Davis again protested, and said that perhaps the managers did not admit colored people to the house, but that the laws of the country did admit them, and he would try to have them enforced.”

On December 10th, 1879, the New York Times reported “The Grand Jury of the United States Circuit Court” issued an indictment of Samuel D. Singleton, “door-keeper of the Grand Opera-house” for “violation of the Civil Rights bill. His offense consists of refusing admission to, and ejecting from, the theatre a young colored man named William R. Davis, Jr., about a month ago. The punishment, on conviction, is fine or imprisonment, or both, and this is the first criminal proceeding under that act ever begun in this State.” The Times, on January 15th, 1880, reported that the case was presented in the United States Circuit Court but held over until the next term.

At the initial hearing, the defense counsel for Singleton argued that the Civil Rights Act was unconstitutional. The case was heard again on March 9th, 1880 and sent to the Supreme Court with a request for “early adjudication.”

On October 16, 1883, the New York Times announced the Supreme Court had reached a decision in U.S. v. Singleton and the other Civil Rights cases. 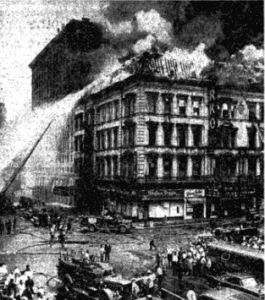 “The most important decision rendered by the Supreme Court of the United States to-day was that in the five cases commonly known as the civil rights cases, which were submitted to the court on printed arguments about a year ago . . . These cases were all based on the first and second sections of the Civil Rights act of 1875, and were respectively prosecutions under that act for not admitting certain colored persons to equal accommodations and privileges in inns or hotels, in railroad cars, and in theatres. The defense set up in every case was the alleged unconstitutionality of the law.”

According to a companion editorial (New York Times, October 16th, 1883):

“The Supreme Court of the United States has finally decided against the constitutionality of the Civil Rights act of March 1st, 1875, in a number of cases from various parts of the country submitted to the court a year ago on written arguments. The act provided that all persons within the jurisdiction of the United States should be entitled to equal accommodations and privileges in inns, public conveyances on land and water, and in theatres and other places of public amusement, subject only to conditions established by law and applicable alike to persons of every race and color.”

The Times editorial concluded “the decision is not likely to have any considerable practical effect, for the reason that the act of 1875 has never been enforced . . . There is a good deal of unjust prejudice against negroes, and they should be treated on their merits as individuals precisely as other citizens are treated in like circumstances. But it is doubtful if social privileges can be successfully dealt with by legislation of any kind. At any rate, it is now certain that they are beyond the jurisdiction of the Federal Congress. If anything can be done for their benefit it must be through State legislation”..