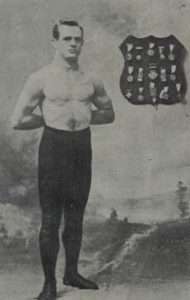 New York State’s connection to Olympic wrestling goes all the way back to 1904, the very first year freestyle wrestling was included in the summer games, when Isidor “Jack” Niflot, then of New York City, but later a longtime Sullivan County resident, won a gold medal in the bantamweight division.

Isidor Gadar Niflot — he was almost always known as Jack – was born on April 16, 1881 in Poland. His father, Adolph, had been born in Russia and brought the family to America when Jack was still a youngster. Adolph was a learned man who liked to read the Bible in Hebrew and to invent ingenious gadgets to solve longstanding problems just for the pleasure of solving them. Even after capturing his Olympic gold, Jack lived with his father and many siblings in a small second-floor flat at 208 West End Avenue in Manhattan.

A New York Times reporter visited the flat for a story he did on Adolph Niflot when he invented a method of exhausting fumes and furnishing fresh air to New York City’s subways in May of 1906, and found the trophies Jack had amassed on display throughout the modest home.

“What spare room in the little flat that is free from gold medals and bronze and silver and gold trophies, is now taken up with an eight-foot working model of the Subway,” the paper reported in its May 25th, 1906 edition, noting the Jack was at that time on his way back to the United States after competing in Athens, Greece.

By that time, he had already won six consecutive U.S. Amateur Athletic Union championships, the last in 1905, as well as the Olympic gold medal. And the strange circumstances surrounding the Olympic competition in 1904 should not in any way tarnish his victory.

That year — the first for the freestyle version of the sport in Olympic competition – the summer games were scheduled to be held in Chicago, but because the World’s Fair was being held that year in St. Louis, the Olympics were switched to that city at the last minute. Travel difficulties and tensions caused by the Russo-Japanese War kept many countries from competing that year, and in some sports, wrestling included, only athletes from the United States competed.

Niflot won the gold medal at 125.5 pounds, the third lightest weight at the time, with three consecutive falls over his fellow countrymen, thereby capturing the national championship and the Olympic gold medal in one fell swoop.

Following a storied amateur wrestling career, Jack became a professional wrestler, touring the world giving exhibitions. As a professional, he would often wrestle against opponents who were considerably heavier, and despite the weight disadvantage, he more than held his own. Contemporary accounts of his bouts would often include references to his opponents having an advantage in weight or in strength, but invariably mentioned Niflot’s superior technique and his scientific approach to the sport.

Noflot also served as the wrestling instructor at Columbia University for a time, and later worked in the same capacity at Princeton and at the New York Athletic Club. He could also occasionally be seen in the role of referee at various matches.

By 1920, Niflot had moved to Queens, and by 1930 he was living in Long Eddy in Sullivan County, where he promoted and would occasionally appear on local wrestling cards at the Western Hotel in Callicoon, at North Branch and Fremont Center, never once losing a match despite nearly always giving away 20 or more pounds to his opponent.

Isidor Niflot died on March 29th, 1950 when he suffered a heart attack while purchasing a magazine at Bennett Brothers Drug Store in Callicoon, Sullivan County. He was buried in the Rock Valley Cemetery. His son, John “Jack” Niflot, was a longtime pressman at the Sullivan County Democrat newspaper, a town of Fremont councilman, and active member and president of the Basket Historical Society, where he founded and edited the society’s newsletter, The Echo. John Niflot died in 2013.