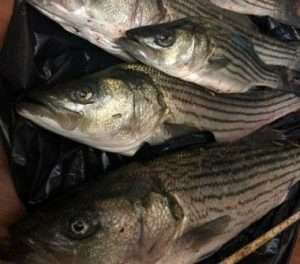 According to a press release issued by DEC, on the early morning hours of April 21st, NYS Environmental Conservation Officer (ECO) Pabes responded to a report of multiple anglers keeping excess and undersized striped bass in the village of Great Neck, Long Island.

The caller claimed they observed the fishermen placing bags of fish into the back of a vehicle. When confronted by other anglers about these illegal fish, the fishermen left the scene and went to a nearby gas station on foot. ECO Pabes met the caller and the suspects at the gas station where they denied any wrong-doing and had no fish in their possession.

ECO Pabes reported that he noticed that one of the suspects had car keys on the table next to him, but claimed to be getting a taxi home. Suspicious, the Officer says they waited next to the vehicle reported by the caller. Within minutes, another vehicle dropped the two suspects off at the SUV, where they quickly jumped into the vehicle and sped away.

ECO Pabes hopped into his patrol vehicle and followed, catching up to the SUV at a red light. The suspects began to drive erratically, speeding down a side street and blowing through a stop sign. ECO Pabes eventually stopped the SUV and says the the driver immediately confessed to having striped bass in the vehicle and driving without a license.

The Officer issued four tickets for undersized and excess striped bass, failure to stop at a stop sign, and unlicensed operation of a motor vehicle, returnable to Nassau First District Court. The five undersized striped bass were seized and donated to a wildlife rehabilitator.