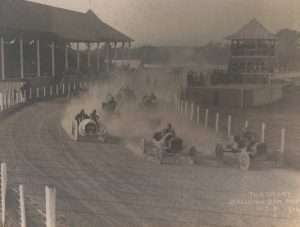 The Saratoga County History Center at Brookside Museum will open a new exhibit, “County Life in Photographs,” on Thursday, May 5th, with a 7 pm reception.

The exhibit includes 26 images of gatherings in Saratoga County between the 1870 and 1950, interpreting the ways in which county residents interacted in social, political, and celebratory contexts.

A prime example is the panoramic photo of the Jonesville Methodist Church clambake in 1922, a popular annual event that ran for 66 years until ending in 1962. Most photographs were found in the History Center collection, while others were provided by town historians.

Research was carried out by three students from the history department at Skidmore College: Cayden Bobley ’23, from Sea Cliff, NY; Chloe Hanrahan ’24 from Andover, Mass.; and Alex Western ’24, from Northampton, Mass. Exhibit management was by Maris Lau ’24, from Hong Kong. John Greenwood of Wilton served as community advisor, and Prof. Tillman Nechtman was faculty sponsor.

The exhibit will remain open through 2022 during the museum’s open hours. The museum is located at the foot of Front Street in Ballston Spa. For more information visit their website or call (518) 885-4000.