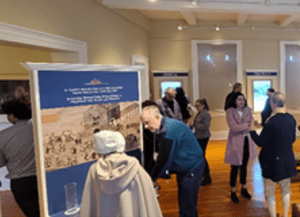 The New York State Office of Parks, Recreation and Historic Preservation and the Palisades Interstate Park Commission has announced the opening of “George Washington: Perspectives on His Life and Legacy Offers Picture of Revolutionary War General and First President,” a new, nearly completely digital exhibit at Washington’s Headquarters State Historic Site in Newburgh.

The exhibit is the state park system’s first exhibit that is completely available in Spanish and English, and the first installed as part of the Our Whole History initiative to bring forward the under-told stories of all the people who lived at State Historic Sites.

The exhibit explores six aspects of Washington’s career and personal life: General; Politician; Celebrity; Roman Virtue; Slaveholder; and Private Citizen. By using quotes from Washington’s contemporaries to discuss how he was viewed at the time, and by exploring opposing viewpoints on Washington, the exhibit goals are to expose visitors to new information about George Washington, encouraging visitors to reconsider their own views and assumptions about Washington; to inspire conversations that foster empathy and curiosity about the varied perspectives on Washington; and to encourage visitors to see relevancy of this history to their own lives.

Research on the exhibit took place over the course of nearly three years and included review of every known document that George Washington wrote while he was at Newburgh, as well as a significant body of things written to and about him, and a large body of the most recent published scholarship.

Washington’s Headquarters is located at the corner of Liberty and Washington Streets within the city of Newburgh’s East End Historic District, and is open Wednesday through Saturday, 11 am to 4 pm, and Sunday, 1 to 4 pm through the Fall.