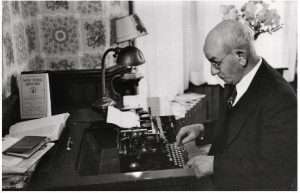 Huddleston intended to collect several judgments from Van Alstine arising from the injury to the child and secure some of Van Alstine’s property as collateral against various outstanding judgments. Van Alstine picked up a wooden bar and clubbed the deputy sheriff to death. The killing was, as the ghost says in Shakespeare’s Hamlet, “a murder most foul.” 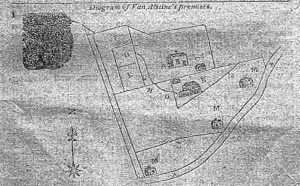 Van Alstine dragged Huddleston’s body into his barn, covering it with chaff and straw. After having his supper, Van Alstine returned to the barn, retrieved the corpse, carried it out to a nearby field, dug a hole, threw the body into the shallow grave, and then tried to conceal his murderous deed by dragging the burial site with a team of horses and a harrow.

Though Van Alstine was not immediately arrested, his crime was soon found out. Someone discovered a sheepskin at Van Alstine’s farm that the deputy sheriff used under his saddle, and Betsey Huddleston identified it as belonging to her husband.

More incriminating, the warrant brought by Huddleston to serve notice on Van Alstine was found hidden in Van Alstine’s haymow. Jared van Wagenen, who wrote an account of the Huddleston murder, tells us, “It was not filled out or receipted, as surely it would have been if the money [as Van Alstine claimed] had been paid.” There was blood on the barn floor. Many folks suspected that it was not chicken blood as the suspect claimed.

As “suspicion ripened toward conviction,” to borrow Van Wagenen’s fitting phrase, Van Alstine took flight on his victim’s horse, eventually making his way to Kingston, Ontario. He was now calling himself “John Allen.” He boarded a schooner with the intent of getting to a place where the US authorities could not go.

There were no extradition treaties in those days. Then, as Van Wagenen writes, “an act of God intervened.” A storm on Lake Erie caused the captain of the vessel to turn back to Buffalo. A fellow passenger from eastern New York recognized Van Alstine as the wanted man. After the boat docked, Erie County authorities took Van Alstine into custody and sent him back to Schoharie County. 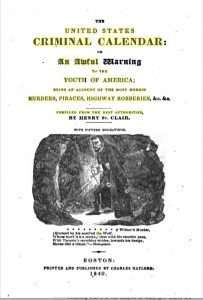 Van Alstine’s murder of Deputy Sherriff Huddleston was such a sensation that it was used to warn the youth of America to shun evil and do good. Henry St. Clair included an account of the murder in his 1840 compilation: The United States Criminal Calendar; or, An Awful Warning to the Youth of America; Being an Account of the Most Horrid Murders, Piraces [sic.], Highway Robberies, &c. &c./ Compiled from the Best Authorities, with Fifteen Engravings. There is no engraving of Van Alstine doing the dastardly deed, but there are other illustrations to warn young readers to stay on the path of righteousness.

St. Clair speculates on Van Alstine’s motive for killing Huddleston. St. Clair claims that Van Alstine’s “desire of getting money and keeping money” as wells as his “peculiar” and “obstinate” character caused others grief. He engaged in lawsuits with his neighbors. He killed a refractory horse “out of passion.” His fondness for horse-racing led to financial troubles. On that fateful day when Huddleston showed up at the Van Alstine to the farm to collect $8 dollars on a previous judgement against the farmer, the Deputy Sherriff confronted an angry man.

Van Alstine told authorities after he had been captured at Buffalo that he was tempted to commit suicide. Even as he was being brought by carriage back to Schoharie County, he was contemplating throwing himself out of the carriage, but, according to St. Clair, the murderer was deterred from doing so by fear of how “such a crime [suicide]” might be punished in “the next world.”

The Trial and Execution

Giles H. Hubbard, Sherriff of the Schoharie County, and editor of a local paper published an account of the trial and execution of Van Alstine in 1819. The account includes testimony given by the prosecutors, defense attorneys, witnesses, and Van Alstine’s “behavior under the Gallows” and “Last Dying Words.” There is lurid detail of what happened when Van Alstine murdered Huddleston as well as Van Alstine’s confession after being convicted by the jury and sentenced to death by Chief Justice Spencer. The murderer asserted that he believed the sentence was just and placed his fate in the hands of a “just God.”

John van Alstine went to the scaffold and was hung on March 19, 1819. His hanging on that gibbet was a public spectacle. It took place about where Lasall Park is behind today’s Schoharie County offices. Public hangings were, as they had been for centuries, both theatre and morality plays. I am not writing here of the illegal hangings (lynchings) such as the Ku Klux Klan carried on against African Americans. I refer to the those carried out under some legal authority such as was done in this country’s witchcraft trials. Public hangings, that is hangings as public spectacles, are now illegal in the United States. 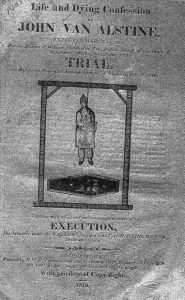 On March 19th, the day of the execution “a large concourse” of people assembled at an early hour. Some say that thirty thousand came to Schoharie to see Van Alstine “meet his Maker.” Van Wagenen’s grandmother told him that “all the roads were black” with people coming to view the hanging.

A procession that included the sheriff, clergy, judicial officials, two companies of horses, and a company of light infantry, formed. Van Alstine went from the jailhouse to the site of gibbet in a sleigh drawn by two white horses. He sat on a coffin and wore a white frock and a white cap tipped with black. Another sleigh followed carrying his friends who were to receive the body following his death. “Solemn and impressive music,” Hubbard wrote,” accompanied the procession.

Two clergymen mounted the gallows with Van Alstine. Hymns were sung, with Van Alstine joining in. Prayers were said. The prisoner was said to be “remarkably firm and composed.” He asked Sherriff Hubbard, “Is it strong?”, referring to the rope. Hubbard assured Van Alstine that it was, but the rope broke under Van Alstine’s weight, and he fell to the ground.

Though stunned, he was able to re-climb the ladder to the gallows platform. He once again shook hands with Sherriff Hubbard. When asked to pull the white cap over his face, Van Alstine refused at first but did so when told that he must. Once again “the fatal spring” was touched. His body hung lifeless for about a half hour before being delivered to his friends.

John Van Alstine (John I. Van Alstine) is buried in Prospect Hill Cemetery, Guilderland, Albany County. He was but 39 years of age. His wife Catherine lived until 1870 and never remarried. One can imagine both the sorrow and the shame that she carried with her all her life. I don’t think that I shall visit the murderer’s final resting place, though I often think of poor Catherine.

What of Deputy Sherriff Huddleston? Huddleston (1758-1818) is honored and remembered on the Officers Down Memorial Page. This national registry memorializes law enforcement heroes who have died in the line of duty under a variety of circumstances such as being shot, struck by a vehicle, and, as a sign of our times, dying of COVID19.