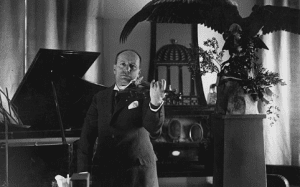 On February 4th, 2006, La Repubblica reported the funeral in Rome of Romano Mussolini. His death had been made public by former actress and politician Alessandro Mussolini, Romano’s daughter out of his first marriage to Maria Scicolone (the younger sister of Sophia Loren) on the website of her neo-Fascist party Alternativa Sociale.

The church service began with Gershwin’s “Summertime” and ended with “When the Saints Go Marching In.” Outside the church hundreds of mourners paid their respect with Fascist salutes.

Fascism, jazz and black gospel mentioned in the same context and a service that had started with a classic tune by a composer of Ukrainian-Jewish ancestry. What brought this contradictory intertwining about?

Romano, the youngest of the five children of Benito Mussolini, was born on September 26th, 1927, in Carpena, Emilia-Romagna. There was a musical streak in the family. When not performing politically, Benito liked playing violin for hours on end. Once Romano had taught himself the piano, father and son often played classical pieces together.

His first experience of jazz came when his elder brother Vittorio (himself a renowned jazz critic during the 1930s) handed him a vinyl of Duke Ellington and his Cotton Club Orchestra performing an arrangement of “Black Beauty” (1928). Romano was hooked. Growing up, he imagined Harlem to be his musical home. The Duke became more important than Il Duce. 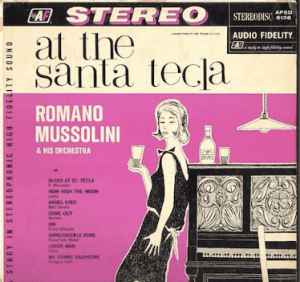 With the fall of the Fascist regime and the lynching of his father, Romano ended up in exile on the isle of Ischia. There, in 1948, he met guitar player Ugo Calise who invited him to join his Star Jazz Quartet as an accordion player. It was the beginning of his career as a professional musician.

Fearing that the family name would be a burden he used the pseudonym Romano Full, until he discovered that the Mussolini reference was actually a commercial plus. Inspired by his idol Oscar Peterson, Romano’s career as a pianist took off. In 1956, he played at the first Italian jazz festival at San Remo. He achieved professional acclaim in 1963 after recording Jazz allo Studio 7. The album won that year’s critics award.

Its success put him in the vanguard of Italian jazz and helped launch a series of international tours in which he played with some of the most prominent names in twentieth-century music, among them Duke Ellington, Chet Baker, Lionel Hampton, and Dizzy Gillespie. The highlight of his career came in November 1972 when he gave his first concert at New York’s prime jazz venue, The Town Hall at 123 West 43rd Street. 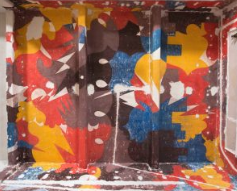 Jazz arrived in Italy via Montmartre’s dance-halls where ragtime had become the rage. By the early 1920s, Rome’s serene order was disturbed by an emerging jazz scene celebrated by supporters of F.T. Marinetti’s Futurist movement. The city’s nightclubs were growing in number, many of those located in cellars and vaults. Set up in the way Parisian cabarets were run with an array of entertainment and a rich selection of food and wines, these venues were favored haunts of the avant-garde. The rhythm of jazz drew a curious clientele.

The cabaret was an instant success. The appeal of swing motivated Futurist composer and theorist Franco Casavola to publish his 1924 manifesto La musica futurista in which he stressed that the aesthetics of jazz should be the foundation of all new music.

Two years later he published a Difesa del Jazzband (A Defense of the Jazz Band) in which he proclaimed that the genre symbolized Futurist masculinity: ‘violent, domineering, brutal, optimistic, anti-romantic, anti-sentimental, and against that which is charming.’ Jazz had found an eloquent clique of urban supporters. 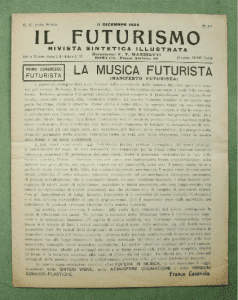 Traditionalists linked the jazz fashion with sex (“jazzing” meant to fornicate). They feared that the foreign invasion of “jazz and condoms” would corrupt society. Italy’s rural character was threatened by “barbaric” importations from abroad. Being under attack from the “savage music of negros,” the integrity of the nation’s civilization was at stake.

In 1935 Mussolini invaded Ethiopia. In response, the League of Nations imposed (ineffective) economic sanctions on Italy. As a consequence, the nation turned inwards and became hostile towards cultural imports. Mussolini banned all foreign words, written or spoken, including those uttered in the new talking movies that arrived in the 1930s. Italians became masters in the art of dubbing.

Between 1922 and 1935 contacts between the United States and Italy were relatively cordial, but Mussolini’s invasion into the African kingdom changed all that. The “rape of Ethiopia” worsened those relations which made the dissipation of jazz in Italy increasingly difficult. All forms of Americanization were resisted.

The publication in 1938 of the “Manifesto della razza” and the implementation of racial laws made resistance to jazz even more compelling. The Manifesto of Race proclaimed with scientific “authority” that the Italian people were of Aryan origin (Art. 7). Asians, Jews, and Blacks were a threat to the true and only civilization (Art. 8). Jazz musicians had to work in a hostile environment.

As a consequence of racial measures, Jewish artists and administrators were removed from theaters, opera houses, orchestras, and radio. Perversely, jazz as the contemporary sound of Black America was re-interpreted as an emblem of corruption. Its popularity was exploited by Jews who had monopolized Broadway. The young had to be protected from the corrupt influences of jazz.

In spite of obstacles, there was no stopping the diffusion of jazz. The northern Italian elite lived in fear of small-minded provincialism. Jazz became a status symbol to them and sign of an outward-looking attitude.

Although the jazz rage did not express any interest in politics, opponents turned it into a factional argument. They denigrated the genre as a product of an inferior culture, thus providing European authorities with the ammunition to forbid the hiring of black musicians. It happened in Italy and Nazi Germany – but also in Britain. In 1935 the British Musicians’ Union banned tours by American jazz performers in order to protect the jobs of dance band musicians.

In spite of such (racially motivated) wrath, composers from differing backgrounds incorporated the genre into their musical language. For them, the arrangement of its tones, timbre, and harmonies were synonymous with contemporaneity. If the concept of modernity in art was stirringly controversial, then jazz musicians put a beat to it. Jazz became the epitome of modernity in Paris, Berlin, and elsewhere.

During the 1930s totalitarian politicians made attempts to cleanse jazz from Europe. The Nazis condemned it as music belonging to a lesser race. A legal ban was imposed in October 1935 across all German national radio. The outrageous public exhibition on “Entartete Musik” followed in 1938. Two years later, Theo Stengel and Herbert Gerigk published their notorious Lexikon der Juden in der Musik.

For the sake of racial purity, the authoritarian state condemned black rhythm and improvisation. The cosmopolitan nature of jazz was alien to the dogmatists of national identity and ethnic purity.

The Nazis’ grasp on culture was far more insidious than that of Italian Fascists. In fact, Mussolini’s crusade against jazz was ambivalent and full of contradictions. Whenever applied, censorship in music was concerned with words rather than rhythms. Songs were ‘seized’ because their lyrics were immoral or anti-Fascist (from “Bandiera rossa” to “Nofrio bolscevico”). Jazz was considered ‘ballroom’ music and its rhythms were fashionable among the regime’s higher echelons.

Turin was a place where many jazz lovers met. In 1933, Alfredo Antonino had formed a “cenacle” of initiates at the Caffè Crimea. Owner of a discotheque of several hundred 78s, he organized musical gatherings, thus spreading the “word” of African-American music from the banks of the River Po. Antonino prepared the ground for Louis Armstrong’s concert in the city in February 1935, an event that was endorsed by Vittorio Mussolini and organized with support of the regime.

By November 3, 1937, La Stampa boasted that no other station in Europe “broadcasts as much jazz as the Italian radio.” Although the station’s “official” policy was to limit foreign music, the Orchestra Angelini & Rudy Vallone performed the first live radio jazz concert from Turin in 1931. Thanks to the programming of EIAR (Ente Italiano Audizioni Radiofoniche) jazz became part of the Italian soundscape.

If Mussolini’s cultural strategy was aimed at defending ‘traditional’ values from the threat of an American style consumer culture, it achieved the opposite. By the mid-1930s virtually the complete jazz repertoire could be broadcasted as long as minor adjustments were made that would signal the capability of Italian culture to appropriate alien elements.

American musicians were given Italian names so they could be shoehorned into the country’s nationalist and anti-foreign outlook. Louis Armstrong was introduced as Luigi Braccioforte, Benny Goodman as Benito Buonuomo, and Hoagy Carmichael as Ugo Carmelo. 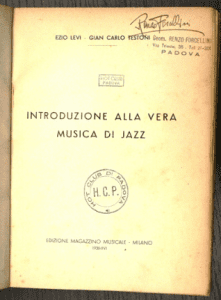 The publication of the “Manifesto della razza” in 1938 coincided with the launching of the first Italian jazz anthology. Dedicated to Vittorio Mussolini, the Introduzione alla vera musica di jazz was co-written by Ezio Levi, a Jewish musicologist. Jazz defied racial laws. In the years between 1938 and 1942 more jazz was recorded in Italy than in any previous period.

How does one explain such contradictions? Music for Mussolini was a means to achieving his ends, a calculated rather than creative endeavor. Unlike the Nazi veneration of Richard Wagner and the grand tradition of Austro-German music, Italian Fascists and Futurists showed no passion for their musical past.

Il Duce was not particularly interested in opera. From his perspective, La Scala belonged to the past as opera had lost its historical function. His age demanded theaters that would accommodate thousands of spectators and offer spectacles that matched the new technologies of programmed information and sound amplification. The appeal of jazz could be harmonized with the nation’s political stance. Benito Mussolini allowed jazz to be assimilated and Italianized as an integral part of Fascist strategy.