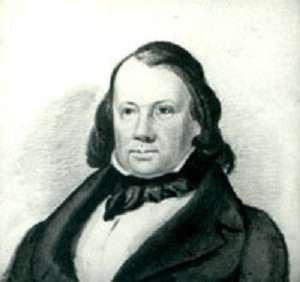 There were also those just trying to get away from home and signing on to a whaling ship seemed the adventure of a lifetime.

Whalers could venture all over the seas, see what they wanted to see, go where they wanted to go, and if they came upon a whale or seals, that could pay for the trip. Whalers traveled for up to five years at a time, catching whales wherever they could, periodically putting into port and selling the whale oil, fat and skin and showing a healthy profit. These whalers were some of America’s earliest explorers. 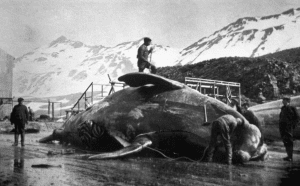 Edmund Fanning was a whaler. Between 1792 and 1832, he made 70 voyages all over the world. Fanning discovered and documented new islands, visited far-away lands, met native people, witnessed solar auroras, found rich seal islands and sailed near Antarctica.

In 1812, President James Madison commissioned Fanning to undertake a voyage of exploration to the South Seas. However, the declaration of war against Great Britain that same year prevented the trip. In 1829, they tried again but by now Fanning was too old to sail and he recruited crews for the expedition. Congress dictated that Fanning undertake the exploration but fund it through whale and seal hunting during the journey.

Fanning commissioned two brigs: Annawan, with Nathaniel B. Palmer as captain, and Seraph with Benjamin Pendelton commanding. Both vessels sailed from Connecticut in October, 1829. The ships contained the normal number of sailors, seal hunters and crew, but Fanning needed an extra ingredient. Foreseeing his need to prepare a report to Congress, he needed a naturalist, someone who could recognize unusual plants and animals, document their differences, and make accurate and beautiful drawings of what he saw. He found the man he wanted in James Eights.

James Eights was born in Albany. His father was Dr. Jonathan Eights, a well-known Albany physician. His grandfather was Abraham Eights, called “Father Eights” by his Albany neighbors. James was born in 1798 in the family’s Dutch house on the corner of North Pearl and Columbia streets.

James Eights’ early interest in art also included a growing interest in science which would have come naturally to a child growing up in a doctor’s office. His interest in biology and medicine was supplemented by an interest in plants and rocks. Albany’s patroon, Stephen Van Rensselaer III had Eights appointed draftsman to the geological survey for the Erie Canal.

By the 1820s, Eights was working as a surveyor and draftsman for scientists Amos Eaton and Ebenezer Emmons who were among the founders of Rensselaer Polytechnic Institute. In 1823, he was one of the founders of the Albany Lyceum of Natural History. He published several scientific papers through the Albany Lyceum in their publication Transactions. In 1826, Eights worked for Eaton’s “Traveling School of Science on the Erie Canal.” In 1827, Eights was an examiner at RPI.

In 1828, Fanning appointed Eights, a surgeon, naturalist and artist, to the “Exploring Expedition of 1830,” among the first of the United States’ “Voyages of Discovery.”

The two brigs left for Antarctica with an agreement to meet at Isla de los Estados if they became separated, which occurred almost as soon as they left port. Isla de los Estados (Staten Island in English) was located off the east coast of Tierra del Fuego near Cape Horn. It was a port of staging and attack for sealers in the cold southern waters. From here the boats took off for the South Shetland Islands, a source of an enormous supply of seals.

“They are formed by an extensive cluster of rocks rising abruptly from the ocean, to a considerable height above its surface. Their true elevation cannot easily be determined, in consequence of the heavy mass of snow which lie over them, concealing them almost entirely from sight. Some of them however, rear their glistening summits to an altitude of about three thousand feet and when the heavens are free from clouds imprint a sharp and well-defined outline upon the intense blueness of the sky. They are divided everywhere by straits and indented by deep bays or coves, many of which afford to vessels a comfortable shelter from the rude gales to which these high latitudes are so subject.” 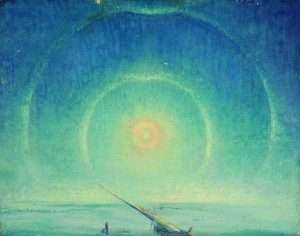 “The sun, even at midsummer, attains but a moderate altitude in these dreary regions and when its horizontal beams illuminate these masses of ice, their numerous angles and indentations catching the light as they move along, exhibit all the beautiful gradations of color from an emerald green to that of the finest blue. Some of them, whose sloping sides will admit of their ascent, are tenanted by a large assemblage of penguins, whose chattering noise may be heard on a still day an incredible distance over the clear smooth surface of the sea.”

Eights made the first known geological observations of these islands in Antarctica:

“They are composed principally of vertical columns of basalt, resting upon strata of argillaceous conglomerate; the pillars are united in detached groups, having at their bases sloping banks constructed of materials which are constantly accumulating by fragments from above.”

“The only appearance of organic remains that I anywhere saw was a fragment of carbonized wood imbedded in this conglomerate. It was in a vertical position, about two and a half feet in length and four inches in diameter; its color is black, exhibiting a fine ligneous structure. The concentric circles are distinctly visible on its superior end. It occasionally gives sparks with steel, and effervesces slightly with nitric acid.”

In 1916, Dr. John M. Clark, of the State Museum in Albany wrote that the Norwegian Henry Larsen had been given the credit for discovering the first fossils in Antarctica in 1892: “But here was Eights more than 60 years before, knocking out fossil wood from the sandstones of the South Shetlands – wood which, in more than remote probability, pointed toward the mysterious Gondwana Land which has been thought to have bound Antarctic America to the Orient during most of geologic history.”

Clark went on to say that after a rich supply of fossil life was brought home by a variety of explorers “let us acknowledge the keen-eyed record and the intelligent interpretations of the Albany naturalist.”

James Eights was among the first to describe active volcanoes in the area and took note of a remarkable half-submerged crater, Deception Island. Eights went on to describe the lichens and small plants that thrived in the area as well as the water mammals: the sea elephant, the sea leopard and the fur seal.

And also another animal:

“There is also a fourth species, which I have no recollection of ever seeing the slightest notice of … it was standing on the extremities of its fore-feet (flippers), the head and chest perfectly erect, abdomen curved and resting on the ground, the tail was also in an upright position; the animal in this attitude bore a striking resemblance to the representations we frequently meet with of the ‘mermaid,’ and I think it was one of the animals of this genus that first gave origin to the fable of the maid of the sea. When I approached within 100 feet it threw itself flat and made rapid for the sea; it appeared about 12 or 15 feet in length and distinctly more slender in proportion than any of the other species, so much so that the motion of the body seemed perfectly undulating …” 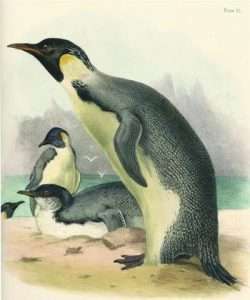 “The King Penguin is the largest and most beautiful of the species, and may be seen in great numbers covering the shores … their upright position, uniform cleanliness, and beautiful golden yellow cravat, contrasts finely with the dark background by which they are relieved … which compares them to a regiment of soldiers immediately after parade.

“The rookery penguin is more numerous … occupying smooth strips of plain for a mile or more … passing through them, they barely give you sufficient space, picking at your legs and keeping up a continual chatter. Their whole appearance as you walk along brings powerfully to your recollection the story of Gulliver, striding among the Lilliputians.”

Eights published at least three papers with exquisite drawings on his findings in Antarctica. In one of them, the Journal of the Boston Society of Natural History, he gave an account of Decolopoda Australis, an unbelievable ten legged Pycnogonid, the first of its kind.

A ten-legged pycnogonid such as Decolopoda was an unheard of thing until Eights described this one and for some reason his discovery appears never to have come to the attention of students of the group, for nowhere, so far as I have been able to find in the writings since his paper was published, has mention been made of the remarkable fact.

When I looked up Eight’s paper a few years ago I thought at first that a mistake had been made in the drawing and one too many pairs of legs put on the animal. “I was not so much surprised as I should otherwise have been when a paper appeared this winter (1905) by Mr. Hodgson naturalist on the Discovery, describing a ten-legged pycnogonid. … I then wrote to Mr. Hodgson calling his attention to Eight’s paper … and in reply he informs me that … (his specimens) … agree in all essentials with those described by Eights.”

In 1837, Congress planned a second Antarctic exploration voyage, but after at first appointing Eights, he was later omitted from the trip. It appears that territorial conflicts among the accompanying scientists eliminated Eights. After Eights returned home to Albany, he regularly wrote anonymous naturalist articles for the Zodiak, an Albany magazine. He wrote on turtles, sunspots, geology, insects, birds, weather, clouds, fossils, minerals and constellations.

Eights was a close friend of Dr. Ebenezer Emmons, New York State Geologist, and was preparing drawings and studies for him in publishing New York State’s first Geological Survey (1834). Eights was appointed Assistant State Geologist for the Central New York District. In the late 1830s Eights took work as a “geologist and mining surveyor” traveling through New England and North Carolina. 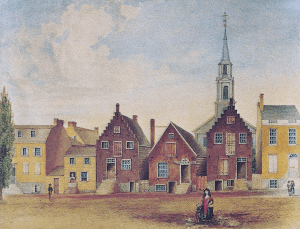 In the 1840s Eights researched and drew a series of color sketches of Old Albany as it appeared in 1805. Since Eights was only seven in 1805, most of the buildings were probably still the same when he did the sketches thirty-five years later and he filled in the blanks from memory. These sketches are still an important visual record of early Albany.

In 1852, Eights published a paper in the Transactions of the Albany Institute on the superficial geology of Albany. It described the composition and hydrology of the sands and clays of old Lake Albany and gives one of the earliest illustrations of the disrupted clay strata broken by shifting icebergs that once covered the Albany area.

In the 1850s, a Mr. Lawtenslager, who owned a business on State Street just below Green, said that he had shared rooms with Eights whom he described as being alone and very poor. Eights died at the home of a sister living in Ballston, Saratoga County, in 1882. He was 84 years old.

In 1857, Harper’s Magazine published an article “Albany Fifty Years Ago.” The article was abundantly illustrated with woodcuts of the streets of old Albany and its residents. These pictures were all copies of the sketches made long before by James Eights.