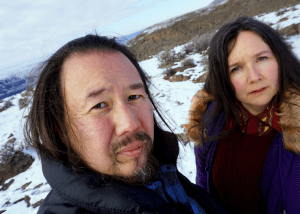 Lake Flower Landing in Saranac Lake will presents the North Country debut of Jessika Kenney & Eyvind Kang, in concert on Tuesday, May 17th, at 7:30 pm, with local tabla player, Alan Simon, opening the evening with a short set.

Jessika Kenney is a vocalist and composer in the realm of new, experimental, electronic, and improvised music. She has explored, and mastered, the interpretation and performance of Persian and Javanese secular court music, including innovative translations focused on the mysteries of these traditions. Kenney was the singer for punk bands Cause and Ex Nihilo, and later for ASVA. She released the solo album Atria (Sige), has recorded the music of Alvin Lucier and Jarrad Powell, and has recorded and performed with Lori Goldston, Holland Andrews, Trimpin, Simone Forti and Wolves in the Throne Room. Her film compositions include the vocal music for Midsommar (director Ari Aster). She has made several installations including multi room sound/video piece Anchor Zero, shown at the Frye Art Museum in Seattle in 2015. Kenney is currently working in collaboration for Color a Body Who Flees at the Hammer Museum in Los Angeles.

Eyvind Kang is a composer and violist whose many albums, include the recent Sonic Gnostic (Aspen Edities) and Ajaeng Ajaeng (Ideologic Organ), going back to Sweetness of Sickness (Rabid God Inoculator). He has worked with a wide range of musicians including Laurie Anderson, Skuli Sverrison, Bill Frisell, Hildur Guðnadóttir, and many others. He is a disciple of spiritual jazz violinist Michael White, and a lifelong student of North Indian classical music with Padma Bhushan Dr. N Rajam. Beginning in 2021, he has focused on the viola d’amore.

Both Kang and Kenney are faculty at California Institute of the Arts. Together they created Concealed Unity and Siheung Tablatures for orchestra, choir, and soloists for the Tectonics festivals in Reykjavik, Athens and Glasgow. Their most recent collaboration was the installation Spokane River Sound Action, shown at the Gonzaga University Urban Arts Center (GUAAC) in 2022.

Alan Simon, born in Pakistan, has been playing the tabla for over a decade. He was a student of Pandit Aditya Kalyanpur, in the lineage of master-tabla player Ustad Zakir Hussein and contemporary performer Zakir Hussain. He has performed for the President of Pakistan, Pervez Musharraf, collaborated with jazz musicians in Rochester, NY, and presented a program of his own music with Saranac Lake musicians at Lake Flower Landing in 2019. Alan moved to the Adirondack region in March 2017 and teaches math at Mountain Lake Academy.

Admission $20 at the door. Children and teenagers are admitted for free. For more information or to register, email lakeflowerlanding@gmail.com. Lake Flower Landing is located at 421 Lake Flower Ave in Saranac Lake.