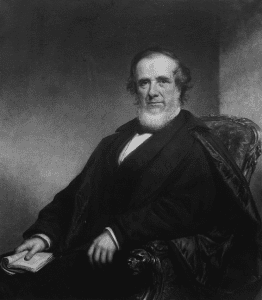 Until the mid-1860s the Fifth Avenue area around Madison Square was Manhattan’s “aristocratic” heart. Its brownstone mansions were occupied by the city’s elite. The gradual incursion of commerce into this residential haven started with high-class hotels.

In 1864 Hoffmann House was one of the first to open its doors. Owned by Cassius H. Read, it was located on the corner of 25th Street & Broadway and contained tree hundred rooms with all the latest conveniences. The establishment proudly advertised its lavish furnishings, carefully chosen artworks, and refined French (Parisian) cuisine. At a time that hotel living was becoming a fashionable alternative to owning a family mansion for wealthy New Yorkers, Hoffmann House was recommended as the most comfortable and homelike residence in the metropolis.

During the 1880s the hotel’s “grand salon” became one of New York’s “secretive” attractions for a very specific reason. 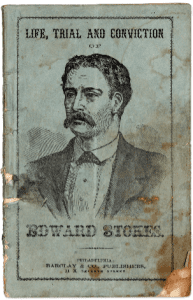 Since 1865, entrepreneur Edward Stiles (Ned) Stokes had been running an oil refinery at Hunters Point, Brooklyn. His “silent partner” was James Fisk, a wealthy businessman who co-operated the Erie Railroad. The working relationship turned sour as the two men shared the affections of the same woman named Helen Josephine (Josie) Mansfield. Her presence caused intense animosity between them. They accused each other of embezzlement, blackmail, and foul play in business. The controversy was fought out in court.

On January 6th, 1872, Fisk was visiting the Grand Central Hotel on Broadway when Stokes met him on the stairs and shot him twice. James died the next day. Although the jury sentenced Stokes to hang, he obtained a second trial. Convicted again of first degree murder, he was granted a third trial. This time he was found guilty of murder in the second degree and spent four years inside Sing Sing prison. 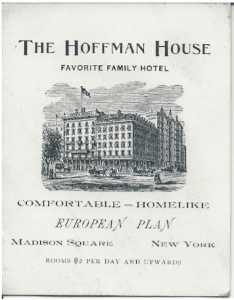 Before his incarceration, Stokes and his family had lived in Hoffman House. He asked Cassius Read to take care of his business affairs. Although the Stokes name would forever be linked to the infamous murder, Read stood by him after his release in October 1876. The pair were involved with several business ventures until, in 1883, Read offered Stokes a one-third partnership in the hotel. It was a move he would come to regret.

When Stokes arrived, the hotel became a joint-stock company. Read made a series of poor business decisions which put him into financial trouble. Stokes did not support him. Instead, he pushed his partner out by getting hold of the majority of shares. By 1895 Reid was forced out altogether and fell into poverty. Three years later Stokes sold his stake in the business, leaving him a rich man.

In French academic art, female nudity was only permissible within the context of a recognizable narrative in a mythological, biblical, or imagined Oriental setting. Academies directed young artists to develop their skills by drawing the naked form of ancient sculpture as well as live models. In spite of self-imposed constraints, eroticism became increasingly prominent when the cultural supremacy of classical tradition started to wane. 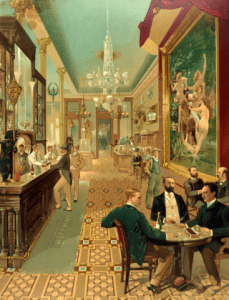 In 1873 neoclassical artist Guillaume [William]-Adolphe Bouguereau created what he considered to be one of his most important paintings. His twelve-foot “Nymphes et un satyre” (Nymphs and Satyr) depicts a scene of four naked nymphs teasing a satyr (half goat, half man) by dragging him into a woodland pond. It was displayed along with a verse from the ancient Roman poet Publius Statius: “Conscious of his shaggy hide and from childhood untaught to swim, he dares not trust himself to deep waters.”

The “classical” context seems virtually irrelevant, the painting is a festival of the flesh, celebrating nudity for nudity’s sake. The lush image seems to suggest female domination and sexual power. The subject provided the artist with an ideal opportunity to demonstrate his skill in painting female nudity from multiple angles.

The painting was exhibited at the 1873 Salon in Paris, a year before the first Impressionist Exhibition of work by thirty young artists was organized (April/May 1874) in a gallery on Rue des Capucines. His following of traditionalist critics praised the new canvas, but it was rejected as “trash” by the up and coming generation of young artists.

For some considerable time, Bouguereau had been one of the most successful French artists who was hugely popular with the art-buying bourgeoisie. He was also an outspoken critic of the emerging avant-garde. He scorned modernist artists for a lack of technical precision, while they ridiculed his reactionary neoclassical approach and subject matter.

Édouard Manet’s “Le bon bock” (The Good Pint) was also exhibited at the 1873 Salon. This painting, inspired by Frans Hals after the artist’s return from a visit to the Netherlands, created a stir amongst critics and the public. Although Bouguereau still had its admirers, it was clear that French taste was changing – neoclassicism was on its way out. Significantly, his contribution to the Salon did not remain in France. Instead, it was bought by an American collector and would make a significant impact in Manhattan.

New York-born John David Wolfe was co-owner of the hardware trading house of Wolfe, Dash & Fisher that occupied seven floors of a marble structure at 38 Warren Street, Manhattan. He was also involved in the establishment of the Chemical Bank and a Director of the Hudson River Railroad. Co-founder in 1869 and first President of the American Museum of Natural History, he was married to Dorothea Ann Lorillard who had inherited part of the Lorillard tobacco fortune.

On his travels for the firm, Wolfe also dabbled in the art trade and built a private collection. He purchased Bouguereau’s painting for the princely sum of 35,000 francs on June 26th, 1873. It was displayed in his mansion at 744 Broadway (the family later moved to 13 Madison Avenue) for many years alongside other high-style French academic paintings he had acquired.

He left his collection to his daughter Catharine Lorillard Wolfe, herself a prominent art collector. Rumored to be the richest unmarried woman in the United States, she was the only female among the one hundred and six founders of The Metropolitan Museum of Art and left her large collection of contemporary paintings to the museum, together with a generous financial gift.

The opening of the Catharine Lorillard Wolfe Wing displaying these paintings created wide interest amongst the public and brought large numbers of people from beyond the elite circles that traditionally constituted the museum’s audience.

Bouguereau’s Nymphs and Satyr was not part of Catharine’s substantial donation. She too may have felt awkward in the presence of nude nymphs frolicking with an equally-naked satyr. In April 1882, she had put the painting on for auction with Leavitt & Co at 817 Broadway. It was snapped up by Edward Stokes for $10,000.

From its beginning in 1864 Hoffmann House attracted celebrities, socialites, and stage performers. Its clientele also included politicians from Tammany Hall who considered the hotel as their unofficial headquarters (the Fifth Avenue Hotel was popular among Republicans). Members included Stephen Grover Cleveland, who was living at the Hoffman on the day he was elected to his second non-consecutive term as President.

The bar room was richly decorated with art works. It was here that Stokes tickled curiosity by putting the “Nymphs and Satyr” on display for all to see. The French may have been bored with a multitude of naked bodies against an imaginative or fake classical background, but American eyes were not accustomed to see much nudity. It was the best place to attract attention to such a sensual creation.

A red velvet, gold-fringed drape sheltered the painting from the glare of gas lights. It was positioned directly across a large glass mirror behind the bar, allowing patrons to discreetly inspect the image. Stokes’s trick worked well. The painting became a tourist attraction. People lined up to catch a glimpse of the “titillating” image. Magazines covered the story. The bar room painting set a trend, as hotels and bars elsewhere followed suit, exhibiting their own classical nudes. 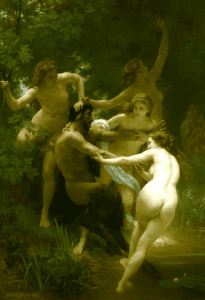 The Ladies’ Mile emerged in the course of the 1860s when retailers started to relocate from Lower Manhattan to Flatiron’s Madison Square district. The traditional brownstone townhouse were replaced by extravagant cast iron department stores in a variety of architectural styles. By 1880 access was greatly improved with the installation of the Sixth Avenue elevated train (popularly known as El). It became New York’s most popular shopping area.

The Ladies’ Mile also boasted upscale restaurants, booksellers and publishers, and performance venues such as the Academy of Music, Steinway Hall, and the first location of the Met. All of these attractions brought the rich and celebrities to the area, especially since the safety of the district allowed women to shop without male companions to accompany them. Hence the name – women were target clients and consumers.

Many of them would spent time in Hoffmann’s “grand salon” to enjoy the ambience and have a peak at Stokes’s naughty canvas. Such freedoms would have been impermissible in previous decades when Victorian norms considered female nudity to be respectable only in spaces reserved for men who supposedly “understood” classical art. This painting and this particular location challenged that assumption. The reception of Bouguereau’s canvas in that sense signified a new configuration of attitudes towards gender relations, sexual display, and public culture.

Vice crusaders fought back. United States Postal Inspector and anti-vice activist Anthony Comstock started action against smut in art, abortion, contraception, and prostitution. He used his official position (in cahoots with the police) and his role as Secretary of the New York Society for the Suppression of Vice (SSV) to make numerous arrests for obscenity. He convinced fellow moralists of his belief that where “the nude in art is most lavishly displayed society has been most degraded.”

In 1887 he began arresting print sellers in the city of New York for offering photographs of French paintings of nudes which, in his view, depraved and corrupted young minds. In an address before the Convention of Baptists Ministers in New York City on December 12th, 1887, he produced his rallying cry: “Morals, not art or literature.” Comstock dearly wished to remove the “Nymphs and Satyr” from sight, but he was blocked from taking action by powerful opponents. He allowed the painting to remain at Hoffmann House, even though he considered the “grand salon” an obnoxious public mixing place of classes and genders.

Stokes died in November 1901. One of his executors was James Leary, a major stockholder in the Hoffman House Hotel Company. What happened to the painting in the aftermath remains unclear. It eventually came into possession of his son Daniel J. Leary who put the canvas into storage for reasons unknown.

It may have languished in a warehouse for four decades because of ongoing legal complications. Others have argued that the “scandalous” painting was kept hidden deliberately in order to shield the public from such an offensive image. It was finally sold in June 1942 out of the Leary estate to Herbert H. Elfers who acted on behalf of Robert Sterling Clark. Bouguereau’s picture was put on permanent display at the Sterling and Francine Clark Art Institute in Williamstown, Massachusetts, where it remains.

It was not until May 2012 that the painting returned (on loan) to New York where is was exhibited at the Met for two years. Few visitors realized what all the fuss had been about.