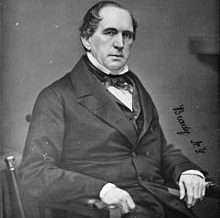 Erastus Corning (1794-1872) got his business started in Troy and made the bulk of his fortune in railroads, including the production of iron tracks and hook-headed railroad spikes. Corning and his partner, John Flack Winslow, received the contract to make the deck and skirt armor for the USS Monitor and at least eight additional monitor class ironclad warships.

Born in Connecticut, Corning began his business career working in a relative’s hardware shop.  His interest in the iron trade would eventually lead him to establish the New York Central Railroad which, during his lifetime, was the largest corporation in the United States.  He served as Mayor of Albany, founding a political dynasty that continued into the 20th-century with Mayor Erastus Corning II.

Corning is buried in one of the largest family plots at the highest point of Albany Rural Cemetery grounds (Lot 2, Section 31).

The Friends of the Albany Rural Cemetery will host “Erastus Corning & His Ironworks,” a presentation by Michael P. Barrett set for Thursday, May 19th at the Shaker Road Loudonville Fire Department Station One.

Tickets are $20 and are available online or at the door. The program will begin at 6:30 pm. The Shaker Road Loudonville Fire Department Station One is located at 550 Albany Shaker Road in Albany. For more information or to purchase tickets, click here.