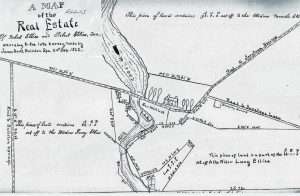 I think one of the most intriguing aspects of being a history buff is peeling back the layers of history beneath the surface of a well-known location. We drive by today and wonder – what was it like 50 years ago? 100 years ago? Even 200 years ago.

What homes, barns, taverns, and other structures were there, long since gone? Which buildings still exist along the road, often remodeled to the point where they might be unrecognizable to the original inhabitants? Who lived there? What roads did they travel to get to the next crossroads, the next village? Do we still follow the same routes that existed back in the day?

All those questions came to my mind as I researched the history of the Saratoga Spa State Park. Maybe more than most locations, this well-known park bears little resemblance to it’s past. Moreover, the Park has undergone several major transformations since it was first settled by Americans of European descent in the years after the nations founding. So, I was excited to rediscover a map in the Saratoga Springs City Archives that helped bring into focus the earliest days of the Park.

The survey map shown here was drawn in 1822. It captures the domain of the Ellis family, by then 30-year residents of the area that soon became known as Ellis Corners. The patriarch of the family, Robert Ellis, Sr. purchased a 600-acre track in 1792 for £650, still a common currency is the early days of the Republic. This lot extended northward from the current South Road in the Park beyond the SPAC parking lot to the vicinity of West Avenue, and eastward across Geyser Creek to the State Reservation and Golf Course.

Ellis was an ambitious man and went about taking advantage of the varied landscape of his purchase by developing a large farm, as well as establishing a sawmill on the creek, where he constructed a dam in the same location as today’s modern dam, to power his mill. When he died in 1807 the inventory to his estate, testified to his success. In addition to several horses, oxen, cows, and many sheep, turkeys and geese, his children inherited the sawmill along with a large quantity of mechanize in the form of planks and boards. One other item included in his estate laid bare another source of wealth seen occasionally among the most prosperous of landowners in Saratoga County. Robert Ellis enslaved four Black people – a woman, girl, and female child and one boy, together valued at $280.

The map above, drawn 15 years after his death, illustrates that the family’s success continued at least until the death of his son Robert, Jr. in 1822. The sketch of their imposing home with its twin chimneys sits among a grove of trees. Today you can imagine the edifice if you stand in front of the Saratoga Auto Museum and cast your eyes northward across the road.

The younger Ellis built a gristmill in 1818 shown at the bottom of the map. Today if you walk the path northward along the creek beginning at the Island Spouter, you can almost see the large stone mill across the rapids emerging from the stone culvert, built to carry the railroad over the creek in later years. This mill, under several owners, remained an important local landmark for over 80 years.

The success of the Ellis family was not all the work of Robert Ellis’ sons. Elizabeth “Betsey” Ellis married George Peck, another ambitious settler with an aptitude for both industry and commerce. George and his brother Benjamin, born in Rhode Island, moved to the Ballston area in the late 1790s. Brother Benjamin became supervisor of Nicholas Low’s ill fated cotton mill in Ballston Spa for a time. George, after his 1801 marriage established a trip hammer mill and forge along the creek midway between the sawmill and Gristmill as shown on the map. Today you can peer down the cliff as you follow the trail on the north end of the main SPAC parking lot. Your minds eye may just be able to make out the old forge.

The good fortune of the female members of the family continued into the next generation, but their prosperity was not directly related to the legacy of their grandfather. Eleanor and Pamela, daughters of Robert, Jr. married brothers James and Joseph Westcott, whose father Joseph owned the Ballston Spa hotel, today known as Brookside Museum, for a short period before his untimely death in 1795. His son’s became prominent merchants and business owners in Saratoga Springs.

So, the next time you drive south along Route 50 past the Saratoga Performing Arts Center or turn left at the light and slowly make your way along the Avenue of the Pines, think about the Ellis family – their history is all around you. Better yet, choose your own forgotten crossroads and take the time to find out what you may be missing.