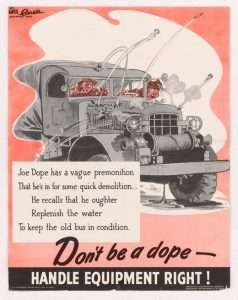 The Still Picture Branch at the National Archives safeguards many series of posters used during World War II by the United States Government. The messages range from the promotion of Victory Gardens and the war effort to military recruitment, education, safety and more.

Cartoonist and writer Will Eisner (1917-2005) was one of the most significant pioneers and innovators within the 20th-century comic book industry. Though his career spanned over half of the century, Eisner is perhaps best known for one of his earliest works — his comic strip The Spirit, which debuted in newspapers in 1940. 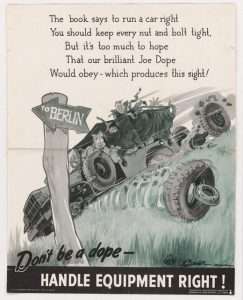 Soon after The Spirit began its run, Will Eisner was drafted into the Army for the Second World War. During his service, he created a series of illustrations to provide soldiers with helpful information about safety and preventive maintenance. Illustrating for Army publications and maintenance manuals, Eisner created the character “Joe Dope” who, through his misadventures, reminded soldiers of the importance of maintaining their equipment properly.

An additional series of posters consists of original artwork and a few photographs for World War Two-era posters. A number of works of art were created by renowned artists, or those who later grew in popularity. The series is entirely digitized and available in the National Archives Catalog.