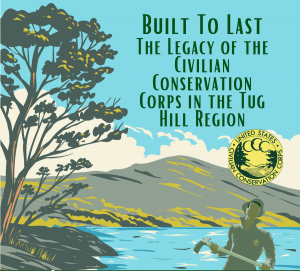 This program offered paid opportunities for young men during the Great Depression to sow the seeds of environmental conservation and civil development projects throughout the United States.

The Oneida County History Center and the Tug Hill Commission will host a panel discussion on the Civilian Conservation Corps (CCC) legacy throughout the Tug Hill Region, on Saturday, May 21st.

This program will look at the history of CCC camps in the Tug Hill Region and projects undertaken by the Corps. Participants will also hear first-hand experience from a former CCC member about life at the camps and how the CCC provided a framework for AmeriCorps, Excelsior Conservation Corps, and the Student Conservation Corps, which are currently involved in projects on state land throughout the region.

This program will begin at 1 pm and will be held in person at the Oneida County History Center in Utica, and virtually via Zoom. For more information or to register, click here.