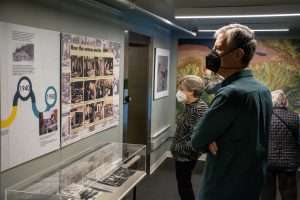 The History Center in Tompkins County has announced the opening of “reCOUNT: Facing our Census,” celebrating the release of the 1950 United States Census by the National Archives and Records Administration (NARA).

reCOUNT builds on the constitutionally-mandated process of counting everyone in the United States, and explores stories and narratives of Tompkins County dating back more than 23 decades.

reCOUNT offers a new way to engage with the census. Instead of an overwhelming set of numbers and data aligned in tables and charts, the exhibit builds human connections to the people behind the statistics. Audiences can explore the growth of Finnish, Hungarian, Syrian, and Chinese communities in Ithaca, or discover some of the local enumerators who did the counting and shaped our communities.

Younger audiences can enjoy the opportunity to trace a colorful path through the museum, add their own pictures and comments on the chalkboard columns, or learn with the Exhibit Hall scavenger hunt. The reCOUNT exhibit packages the complexities of the census for audiences of all ages, and mixes important and critical questions with light hearted local history excerpts.

Across six displays, reCOUNT highlights stories of resilient people and communities. The Family Origins installation features a 19th century hand embroidered traditional Hungarian folk, and a dress on loan from the Tang family who first arrived in Tompkins County in the 1930’s. Another installation looks Around the Block through a deep census dive into one specific block.

This exhibit will run until February 2023. For more information, click here.

Photo of Passage through Time – Timeline of the Census exhibit from reCOUNT: Facing our Census by Peter Fiduccia.