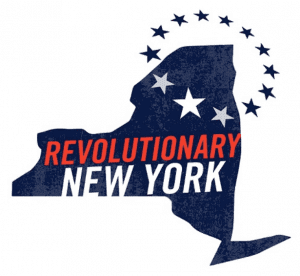 Planning has begun for commemoration of the nation’s 250th anniversary, to be officially called the “Semiquincentennial.” The federal government has established America 250. A number of states, including Virginia have established state commissions. In Massachusetts it is called Revolution 250.

Earlier this year the Legislature passed and the governor signed the New York State 250th Anniversary Commemoration Act to establish a state commission to guide New York’s commemorative activities. State Historian Devin Lander recalled the state’s past commemorations and outlined preliminary state plans for the coming one in a recent interview, “How We Remember: New York’s Commemoration of the American Revolution.”

There are many ways of approaching this commemoration. A few things that might be considered:

*Explain the conditions and uncertainty of the war in New York State.

It would be very useful to have more information about conditions at home during the Revolution, e.g., clashes between Loyalists and Patriots, impact on communities, and in particular impact on women, children and families as soldiers went off to war.

The 1776 State Bicentennial Commission produced a film entitled “The Other Side of Victory” (available on YouTube). This focuses on a small group of soldiers somewhere in southern New York camping out in harsh winter conditions late in 1776. They are hungry and scared, discipline is poor, a marauding band of armed raiders is roaming the countryside, Loyalists pretending to be patriots distract part of the American force while the rest are attacked by the British; and the Americans regroup and ambush a British supply column. The story is rather grim and shows how close the contest was in New York.

Something new that shows actual conditions would be useful.

In some ways, the year 1777 was more important to New York State than even 1776. At the beginning of 1777, British forces had taken over New York City, the ad hoc Provincial Congress was on the run up the Hudson, and the not-yet-created state was facing British invasions from north, west, and east. By the end of the year, the intrepid New Yorkers had written their first constitution (in effect, transitioning the rebellious “province” into a “state”); elected their first government; begun operation of that government; fled the first state capital (Kingston) just before the British attacked and burned it (October 16) and quickly regrouped in Poughkeepsie; and fended off British invasions from the west (Battle of Oriskany, August 6), the east (Battle of Bennington, August 16) and the north (Battle of Saratoga, October 17, usually regarded as the turning point of the war). New York was here to stay! That should be a central theme in the 250 th anniversary commemorations.

*Revisit what it means to be a “New Yorker”

The State Museum did that in a Bicentennial exhibit and an accompanying 1777 publication entitled “Forces: Three Themes in the Lives of New Yorkers.” The purpose of the exhibit, and the publication, said State Museum Director G. Carroll Lindsay, was the answer a central question: What is the character of New York?” The publication identified three themes that are still relevant. (1) MATERIALISM “American materialism is legendary and nowhere has it been longer in evidence than in New York. From the beginning, New Yorkers have epitomized the materialistic drive which aroused the wonder and ire of early commentators.” (2) DIVERSITY.

This section begins “since its origins, New York has been noted for its ethnic, religious, and cultural diversity.”. (3) CHANGE. This section leads with “The ordeal of the Revolutionary War in New York wrought the broadest and most wrenching changes in the history of the state” and then goes on to describe the enduring theme of change in our history.

A newer document would probably come up with other themes. But the project would be a way of trying to capture what has been unique, or at least distinct, about New York, including its willingness and determination to change with the times and keep improving and its leadership in such areas as tolerance, equality, and social justice.

The document, and commemorations generally, would help raise public awareness and appreciation of New York history, reinforcing what Columbia University history professor Ken Jackson often emphasizes in presentations: “It Happened in New York!” — many of the nation’s most important historical developments began or played out here, New York led the way and was the state that other states followed.

Such a document would also address some of the themes of tying the 250 th anniversary celebration to current issues of social policy laid out in the American Association for State and Local History’s “Making History at 250: The Field Guide for the Semiquencentennial.”

*Use the commemoration events to promote New York public history.

The American Historical Association’s (AHA) recent report “History, the Past, and Public Culture: Results From a National Survey” is a useful source for planning 240th anniversary events and public history generally. The report shows that “tangible repositories of the past such as museums and historic sites” are regarded as the most trustworthy sources. People prefer to have history explained and presented to them, e.g., through presentations, over accessing it in other ways such as formal education. Most seem to want “just the facts’” but a sizeable minority want more. “Moreover, those favoring an explanatory view of history showed signs of greater interest in, and perhaps empathy for, peoples and events far removed from the respondents.”

The AHA report reminds us of, and confirms, other natural advantages that New York’s local historians, museums, and historical societies can exploit. But it also suggests ways of refining or revising our approaches.

The commemoration events hopefully will engage the schools. This would be useful in advocating for more coverage of New York history in social studies and history courses. It gets little coverage now.

For instance, New York State History Month (October) is defined in Arts and Cultural Affairs Law, Section 57.02, enacted in 1997 and changed from November to October in 2019.

Section 2 of that law reads, in part, “the commissioner of education, through the office of state history is hereby authorized to undertake projects to recognize New York state history month.

Such projects may include the creation of an essay contest for state residents who are enrolled in any elementary or secondary education program which shall reflect upon the importance of New York state history.” The America 250 commemorations might be a good opportunity to do that.

The Semiquincentennial events might be helpful in connection with promoting:

April 23: The day in 1789 when George Washington was inaugurated as president in New York City, then the nation’s capital.

November 25: Evacuation Day, the day in 1783 when British troops left New York City and General George Washington, Governor George Clinton and other military officers entered the city. This used to be a holiday in New York City.

You can follow all the news about America’s 250th Anniversary here.