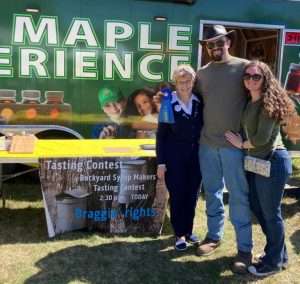 Colton and Allie Clift received their Braggin’ Rights for producing the best tasting maple syrup made in their backyard at the Hadley Maple in April Festival in Saratoga County.

The Clift’s live in Argyle within a 50 mile radius of Hadley, they have 40 taps and boil their own sap. This is the fourth year the Hadley Business Association has awarded to locally produced maple syrup makers their braggin’ rights.

The event was coordinated by volunteer, Eileen Gilbert. Backyard syrup makers wishing to compete in the contest presented their finest maple product to Eileen at Wilder’s Sugar Shack the morning of the contest.

The criteria for earning the Braggin’ Rights for the Best Tasting Backyard Syrup Makers’ Tasting Contest was to bring a 1/2 pint of syrup in a glass container to Wilder’s Sugar Shack on the day of the festival. The makers also needed to have less than 150 taps, boil the sap themselves, and live in a 50 mile radius of the Maple in April Festival, Hadley. Those entering were judged on their syrup’s density, color and flavor by three veteran maple producers; Ron Waite, Scott Monica, and Chappy Aldrich.

The contestants were awarded their ribbons at the Upper Hudson’s NYS Maple Experience Exhibit, which travels across New York State for the purpose of providing a hands-on learning experience the art of producing maple syrup.