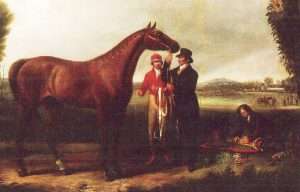 It all amounts to a gallery of horse notables: Fashion, Glencoe, Lightning, Shark, Leviathan, Monarch, and down the list. There are interesting side-lights on the costume of the boys holding their equine charges, one with an Eton jacket and a cap much like that worn by the American troops during the Mexican War, another brave in Hessian boots and epaulets. It is, however, principally the quicker lithographic process that pictured His Majesty the Horse. 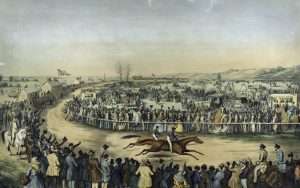 As far back as 1840, Augustus Kollner signed a picture of “Andrew Jackson,” surrounded by smaller drawings of the runners he had beaten. A stud-card this is, I am told, a pictorial advertisement. There’s also an early large racing print: “Peytona and Fashion in their Great Match for $20,000 over the Union Course, Long Island, May 13, 1845, won by Peytona,” done “from nature and on stone by C. Severen [Charles Severen].”

Then came a string of jockey race scenes, real and imaginary, in Jerome Park, Sheepshead Bay, Saratoga Springs; and, of course, portraits of individual horses, such as “Ready for the Signal. The celebrated running horse Harry Bassett” (1878), or “August Belmont’s Potomac and Masher” (1901). Especially was the trotting-horse immortalized. A long line of portraits confronts us, mostly by Louis Maurer [1832-1932] and John Cameron [1857-ca. 1907]. Possibly the earliest is “Columbus and Sally Miller” (1832), lithographed by Endicott.

“Lady Suffolk, painted by Robert N. Clarke, 1844, rode by Alfred Conklin,” illustrates the fact that trotting horses raced with mount in the early days. So we go down the corridors of trotting fame, and trace the time’s reduction from 2:27 3/4 in 1866 to 2:10 in 1891, over the Centreville, Long Island, Fleetwood Park, Morrisania, Buffalo, Utica, and other courses. There is even an early Californian record of local performance, “Lady Vernon, San Francisco, Aug., 1855,” painted by John Murdoch, lithographed by Britton & Bey, of San Francisco. 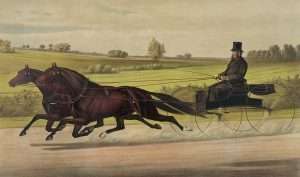 Occasionally several horses were shown grouped, as were “Stella and Alice Grey, Lantern and Whalebone” (1855), or “The great double team trot — Darkness and Jessie Wales, Honest Allen and Kirkwood trotting, 1870” (four-wheel rigs), or George M. Patchen and others, who are presented in W. F. Atwood’s “Trotting Gallery” in the spirit of the old Dutch corporation paintings.

And then come the “fancy subjects,” with appeal to emotion or the risibilities. Louis Maurer and John Cameron synthesized the spirit and thrill of the race in prints such as “A Race for Blood” and “A close Lap on the Run in.” 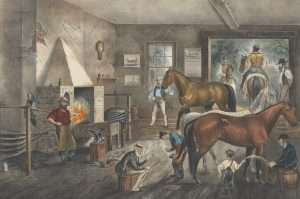 The humorous element blossomed out joyously in the works of Thomas Worth, which for years were a familiar sight in shop windows. With all faults, there is a healthy enjoyment of the scene in such a bit of social history as “A Stopping Place on the Road. The Horse- Shed” (1868), the place identified on the impression in the [New York] Racquet and Tennis Club as “Burnham’s Road House, 79th Street and Bloomingdale.”

And no doubt the hearts of the “sports” warmed to “Going to the Trot. A good Day and a good Track,” “Coming from the Trot. Sports on the Home Stretch,” and “Trotting Cracks at the Forge” (with notice of [the] summer meeting, Jerome Park, and prints, perhaps by Worth himself, on the wall) — all three dated 1869.

How it all takes you back to those days of the horse, not so far off, when the gentleman taking a spin with his spanking team, the hitching-post in shape of a negro boy of metal, the figure of a horse projecting from a carriage or harness shop, the flare of a blacksmith’s fire were familiar sights.

This essay was written by Frank Weitenkampf [1866-1962], and published as “American Sporting Prints” in Scribner’s Magazine in June 1920. Weitenkampf was an authority on engraving and chief of the art and print departments at the New York Public Library, where his papers are archived.  Artists’ first names have been added.