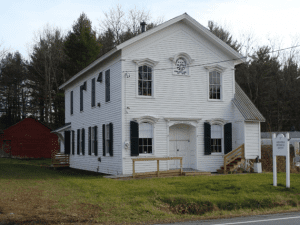 Although little is known about the early history of the Order of Odd Fellows (OOF), it was already an established organization in England before 1730. No one knows exactly where the name “Odd Fellows” came from. One possibility is that prior to this organization, only the wealthy belonged to such fraternities. This organization was made up of common laboring men of England who at the time were thought to be an “odd” group to be forming such an organization.

Another, more probable theory posits that in 18th century England, major trades were already organized as guilds, and “odd fellows” from less typical “odd trades” organized themselves under the “odd fellows” name.

In the mid-1700s, following the Jacobite risings, English Oddfellows (as it was spelled in England) split into two groups: the Patriotic Order and the Ancient Order.  In 1817, Thomas Wilday, an Englishman and member of the Oddfellows, immigrated to Baltimore, and decided to form a chapter. In 1819, his group received the first American charter. Wilday set up additional lodges in America, all chartered from England. When he died in 1861, America had about 200,000 Odd Fellows lodges.

In 1843, the American Odd Fellows had a falling out with their English brethren and decided to break their ties. They established the “Independent Order of Odd Fellows” or “IOOF.”  Also in 1843, the Grand United Order of Oddfellows was created as a predominately black organization, after being denied acceptance in the existing Odd Fellows orders. Membership of both groups in America peaked around 1915 with about 4 million members.

The Odd Fellows, IOOF, claimed not to be a religious organization, but they did require that their members believe in God, and the Bible was used during some of their rituals. Each member was sworn to secrecy. New members being inducted into the organization were asked to participate in a morality type play. They were blindfolded and placed in chains before participating in a mock funeral procession. When their blindfold was removed, the candidate was brought face to face with a skeleton illuminated by torches, and the new recruit was then asked to meditate the meaning of death. They believed that an individual could not appreciate life to its fullest without first coming to terms with death. After taking oaths, the candidate was given passwords, certain secret signs, and shown secret handshakes by the Noble Grand (headman in the local lodge). At this point the new recruit became a first level member. 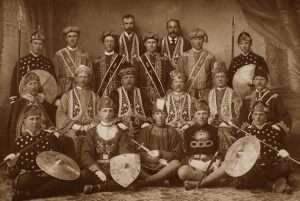 In Saratoga County, the Middle Grove IOOF Hall (Lodge 476, shown in the above photo) in Greenfield was constructed in 1878 on land donated by Moses Darius Rowell, the owner of a general store in Middle Grove, which was once located just east of a present day Stewart’s Shop (at Middle Grove and Murray Road). Moses dedicated the land to a Christian Temperance group called the Rechabites.  When the Rechabites gave up their charter, the building became the IOOF Hall whose second floor became the regular meeting place of the Rebekahs, Craig’s Post, and Good Templars, also a religious temperance society.

Moses D. Rowell was a clerk, a trustee, and a deacon in the Middle Grove Baptist Church which was located adjacent to where the IOOF hall now stands. Moses received his license to preach in 1877 and a year later wrote in the deed to the Odd Fellows that there, “…shall be no dancing allowed on the property.”

Lodge 476, as the new lodge was called, thrived with activity. In addition to the second floor serving as home to the Middle Grove IOOF and Rebekah’s, the first floor also served as a place for justice court and jury trials, performances and rehearsals of Middle Grove’s three bands, and even a place for a show troupe, who arrived in a covered wagon, to rent the hall and give performances nightly for a week, as well as home for other community social gatherings.

In the 1880s, the Cadman sisters from nearby Galway opened a select high school in the building and charged fifty cents per week tuition. The last conductor of the high school was Miss Laura Manchester, a three-hundred pound woman, who threatened misbehaving students by saying she would sit on them if they did not mend their ways. She was said to be the largest woman to have ever darkened a doorway in the “Ville,” as Middle Grove was known at the time, short for Jamesville.

The building also served as a temporary home for the fledgling congregation of the United Methodists sometime before 1888, when they built their own permanent church a short distance from the hall on the corner of Middle Grove and North Creek Roads.

By the 1900s, lodge 476 had nearly one-hundred IOOF members. The Chatfields of Chatfield’s Corners were active in the lodge. Valda Chatfield and John Chatfield joined the lodge in 1880 and later Valda’s son, Eugene, joined. Eugene later told of his experiences as a young boy attending the special programs on January first each year when new officers were installed. He said that he especially remembered the oyster stew served, “they used real Chesapeake Bay oysters,” he said. Later, as an adult, Eugene became a member and eventually secretary of the Middle Grove Lodge.

By the 1970s, however, interest in fraternal lodges was waning. By 1975 the Middle Grove Lodge was down to 15 members. By the 1990s membership had dropped to the point where the organization could no longer pay their taxes and the building was falling into disrepair. In 1994, the Town of Greenfield Historical Society purchased the IOOF hall in Middle Grove for the back taxes. During the next few years, the hall was cleaned and painted and became the storage site for the historical society’s rapidly growing collection of artifacts. On May 8, 2002, Eugene Chatfield, a long-time member of the Town of Greenfield Historical Society, died leaving the society approximately $48,000 from his estate.

Because the IOOF hall occupied nearly the entire parcel of land that it sat on, the society had no space for parking, so it decided to purchase the adjacent parcel that was once occupied by the historic Baptist Church. The church had been destroyed by fire on October 5th, 1974, but the original shed where parishioners parked their horses and carriages while attending services was still standing at the back edge of the property.

The society used some of the money bequeathed by Chatfield along with town and state grants, member donations, and member labor to complete restorative projects on the IOOF hall and carriage shed and to build their museum inside, which is open to the public Fridays July 8 through August 26 4-6 PM.

Photos, from above: IOOF hall, Lodge 476, Middle Grove, now home of the Greenfield Historical Society’s museum; and below, an unidentified group of Odd Fellows in their regalia.


Ron Feulner is a retired high school teacher who has been the Town of Greenfield Historian since 2010. He has written several local history booklets, and is currently working on a history of Middle Grove.