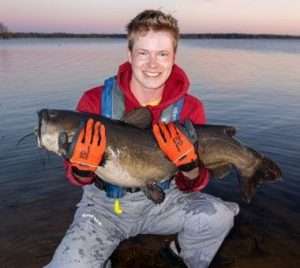 A New York State record for channel catfish was broken on May 8th, 2022. Using cut bait while bottom fishing, Bailey Williams of Watertown reeled in a 35-pound, 12-ounce channel catfish from the Black River in Jefferson County.

Channel catfish are the largest catfish that live in New York. They feed primarily on the bottom at night and are most easily caught using live bait such as worms or baitfish. When hooked, catfish can provide a challenge for even the most experienced angler.

Williams submitted details of his winning catch as part of the State Department of Environmental Conservation’s Angler Achievement Awards Program, which tracks state-record fish. Through this program, anglers can enter freshwater fish that meet specific qualifying criteria and receive official recognition of their catch and an embroidered patch commemorating their achievement.

The three categories that make up the program are: Catch and Release, Annual Award, and State Record.