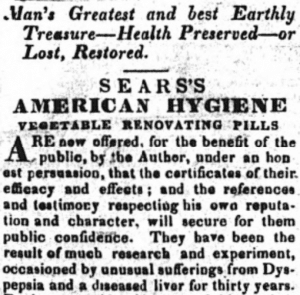 The nineteenth century in America saw the rapid growth of “patent” medicines, developed and marketed to a populace longing for relief from the many chronic maladies of life.  Newspapers of the times were filled with advertising extolling the virtues of these creations as entrepreneurs tried to make their fortune by selling into this need.

The early fall of 1834 found one such man, William Sears, then in his middle fifties, traveling around Saratoga County soliciting testimonials from prominent local citizens as to the benefits of the medicines he had produced that were now being offered to the public.

William, born in 1780, was a son of Sunderland Sears, an early pioneer in the Town of Ballston, and had two more prominent brothers, Dr. Isaac Sears and Rev. Reuben Sears. William’s life is remembered, however, due to a treatise he authored in 1834 which has been preserved in the archives of the National Library of Medicine.

In some biographical notes within the treatise, William states that “at the age of twenty, being a member of Union College, at Schenectady, I was attacked with a bilious fever, which confined me for several weeks.”

Although he attempted to continue his studies, after a few months William was forced to return to his father’s home in Ballston where he consulted his brother Isaac, a physician in practice with a “somewhat eminent physician” in nearby Milton.

Describing his ailment as an “unyielding dyspepsia”, he was given “mercurial” treatments for a period of six weeks and became so debilitated that he remained mostly confined to his home for a year. William spent most of ten years seeking relief and a curative for his condition, consulting doctors up and down the east coast and as far away as Portugal.

Despairing of any relief from the common remedies of the times, William had taken it upon himself to learn as much as possible about the human digestive system in hopes of identifying the source of the symptoms that had tormented him for so long. 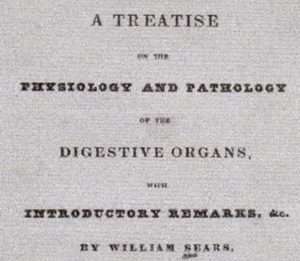 The treatise consists of a summary of William’s life and struggles with his ailment, his search for remedies, and a description of four natural medicines he ultimately developed and offered for sale at his “dispensary” in the city of New York.

To restore this “digestive apparatus” William, after an exhaustive study of indigenous vegetables, discovered, within Saratoga County, what he claimed to be those that contained the necessary properties that he was now offering for sale to the public in four products.

First were the American Hygiene Vegetable Renovating Pills for restoration of digestive health, which William claimed to have all the good attributes of mercury (the standard treatment of the day) but without the side effects. Among the ailments of the digestive system that these pills can cure were said to be everything from indigestion to headache, liver complaints, various pains and fevers, and even hypochondria.

In addition to the Renovating Pills, William was offering a cough syrup suitable for all diseases of the lungs, a diuretic to expel morbid liquids from the system and even an ointment for the treatment of piles.

The presentation of the various remedies also contained the usual disclaimers similar to those we often see today in advertisements for drugs; to wit, “obstinate cases may, however, occur which will require a treatment somewhat different from that prescribed….”. In such cases the patient was advised to apply directly to William’s dispensing office for further advice and direction.

To make the case for these medicines all the more compelling, William had spent a few busy weeks in Saratoga County in the autumn of 1834 obtaining endorsements for his character and creations. Character references came from two of the principal men in the county at the time: John W. Taylor, a member of the US House of Representatives between 1813-1833 who served two terms as Speaker of the House, and Samuel Young, whose long political career included terms in the New York State Assembly and Senate. Both these men confirmed knowing William for thirty years and attested to his moral character and reputation.

Among a long list of other character references included one from his brother, Reverend Reuben Sears, a minister most famous for composing book and poem about the mineral waters of the Ballston Springs.

For several years in the late 1830s, New York newspapers contained advertisements for the products of “Dr. Sears” (although he admittedly did not have a medical diploma), along with additional endorsements from satisfied patients. There is no evidence that William’s medicinal enterprise was profitable however and the fact that he left the city of New York and headed west to St. Louis in the 1840s might suggest otherwise.

It is easy with the benefit of hindsight and knowledge of twenty-first century medicine to dismiss William Sears and those like him as charlatans and frauds seeking to earn a living at the expense of the suffering masses.

A more generous view of William’s efforts however, might point to an earnest man who, to improve his own life, had devoted years to gaining some relief for his symptoms and, upon achieving some measure of success, took advantage of an opportunity to offer his products to others who were in similar circumstance.

Of course, we will never know the motivations behind William Sears’ particular calling, but we can be thankful that his treatise has been preserved to offer an interesting view into domestic life in Saratoga County during the first half of the nineteenth century.

Matt Grumo is an amateur historian who is retired from GE. For the past twenty-five years he has lived in the home originally built by Uriah Gregory in Ballston and has enjoyed researching the family of this early Ballston settler and Revolutionary War pensioner. He is currently finalizing a book to preserve this history for future generation.