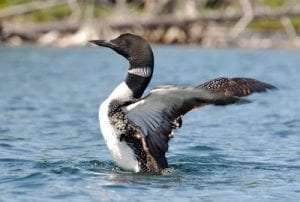 It is always difficult to predict when the ice will go out on a given body of water in the Adirondacks, however, it is easy to say when that waterway will be occupied by a loon, as this symbol of the northern wilderness always seems to arrive within hours of the ice disappearing.

The urge to return to its breeding territory is especially strong in male loons. Because of a recent population increase in this species, there can be intense competition for the remote sections of the large lakes and back country ponds that are highly attractive to this bird with the haunting voice.

As warmer weather arrives, and ice out approaches, loons start to migrate inland from the Atlantic seaboard where most individuals pass the winter. Large lakes that are regularly ice free during late winter are occasionally used as stop-over sites as the loon travels northward. From these locations, some naturalists believe that loons periodically fly over the general region in which they intend to spend the breeding season in order to evaluate the conditions below.

Should large open patches of water exist within its former breeding territory, the loon will land. However, if ice still covers the pond or lake that it wants to occupy for the summer, it will seek out a large, ice free waterway where it can wait until the ice eventually melts on its preferred haunts.

Because a loon is far better adapted for moving under water than taking to the air, this hefty bird is reluctant to land in places in which it may become trapped. Unlike nearly all other birds, a loon cannot quickly burst into flight. In order to become airborne, a loon must first run across the water for a distance of 50 yards or more depending on wind conditions to gain the appropriate speed and momentum that allows it to lift its body from the surface. Even then, a loon requires another 200 to 300 yards to gain sufficient altitude to clear any trees that may be on the shore.

Should a loon accidentally land in a small pond that doesn’t contain the appropriate quarter mile take-off zone, it may become stranded there. Also, the legs of a loon are not structured to run on solid surfaces. This makes a frozen lake as hazardous as too small a pond.

Once well above the ground, the loon is a powerful flier. Researchers have measured the loon at speeds of 60 miles per hour which enable it to travel fairly long distances in a relatively short span of time.

Even though the waters to which the loon returns are dangerously hypothermic for humans, loons function well in such frigid conditions. The insulating layers of fat on their body and their ability to generate internal warmth allow it to survive in near freezing waters for an indefinite period of time.

Like most birds, the loon has a strong instinct to return to the exact body of water that it occupied the previous year. Holding a prior claim to a site seems to be a distinct advantage for a loon, yet it is by no means a guarantee for a peaceful spring. Younger birds that are looking to establish a breeding territory for the first time or older individuals that have been displaced from their territory may occasionally challenge an owner for the right to reside there this coming breeding season. Confrontations can occasionally become quite fierce between males as one study of loons indicated that up to one-third of resident males that lost territorial battles with encroaching individuals eventually died of the wounds incurred in these fights.

Unlike some birds, loons do not mate for life. The female that eventually is successful in claiming a territory breeds with whatever male happens to reign in the corresponding location. In places in which a loon population has room to expand, and territorial battles are at a minimum, a female may breed with the same male for more than a dozen consecutive years.

Within a few weeks the loons that reside in the many pristine waterways of the Adirondacks will all be involved with nesting. This is a critical period in their life, as there are many dangers that confront these impressive aquatic birds. Watching loons and listening to their music is a great part of a wilderness experience, and it has already begun as the ice finally goes out on our Adirondack waterways.

Photo of loon in Adirondacks.