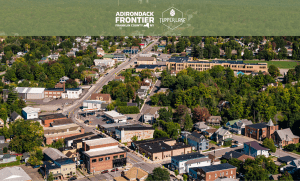 Tupper Arts and the CNY Home Improvements crew has been building, reinforcing, and renovating the Tupper Lake Arts Center, with a grand unveiling planned for early June.

The organization is also hoping to use some of the village’s recently awarded $10 million Downtown Revitalization Initiative grant money to purchase and renovate the neighboring State Theater.

The purchase would allow the organization to host live performances year-round, providing a way to build on the arts center’s renovations.

CNY Home Improvements began work on Tupper Arts Center in mid-December. Once complete, the building is expected to have a new facade, gallery space, and lighting. Steel beams were also installed to resolve a structural issue.

The project has costed a total of $206,100. A fundraising effort helped cover a lot of the cost, along with a $50,000 New York State Main Street Grant obtained through the Franklin County Economic Development Corp.

The next group of projects — about 15 — are expected to go out to bid in April. The jobs will include facade work; interior commercial renovation; building steps, stairways, and decks; and creating, converting, or renovating residential units.

Contractors can approach the bidding process in a variety of ways, including bidding on a single, large-scale project or pursuing several smaller projects.

Contractors can see what projects are available by visiting the Adirondack Frontier website.