The life cycles of the three species of stream salamanders native to the Northeast – northern two-lined, northern dusky, and spring – are closely tied to the small streams where they are found. All three species belong to the Plethodontidae family, which are lungless salamanders that breathe through their skin.

Stream salamanders forage for small invertebrates both on land and in water and have a lengthy aquatic larval stage during which breathing is done with gills. The presence and persistence of these amphibians, therefore, can be greatly affected by the condition of the forested buffer along streams, as well as other factors, including atmospheric pollution.

The smallest and most abundant stream salamander is the northern two-lined salamander (Eurycea bislineata). This slender, coppery-colored amphibian with two black stripes can reach lengths of 3 to 4 inches, much of which is tail. They are easily found by flipping rocks and logs along small rocky streams, seeps, and springs. Females attach their eggs to the underside of rocks within a rushing stream (a seemingly impossible feat that I’d love to witness!). On rainy nights they may seek prey within the forested buffer up to 100 feet or so from the stream edge. 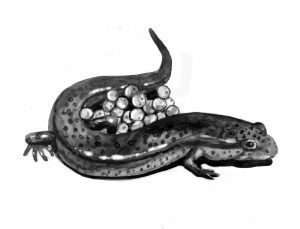 The larger and chunkier northern dusky salamander (Desmognathus fuscus) is greyish-brown to black and may reach 5 inches in length. Northern duskies prefer stream habitats with mossy seeps and mucky soils, and they remain relatively close to stream edges during their forays for terrestrial prey. Females lay their eggs in moss or beneath logs in seeps adjacent to streams, and guard the eggs until hatching.

The spring salamander (Gyrinophilus porphyriticus) is the largest and least common of our stream salamanders, reaching a length of 8 inches. These salmon-colored amphibians with fine black reticulations are only found in highly-oxygenated, cold, clear springs and rocky headwater streams in forested areas. Like the northern two-lined salamander, female spring salamanders defy gravity and rushing water to deposit up to 100 eggs on the underside of rocks or logs in fast-moving streams. Spring salamander larvae have large, feathery gills and spend 3 to 4 years in streams, often reaching 5 inches in length before transforming to the adult stage, when they begin venturing up to 150 feet from streams on rainy nights in search of prey.

Land managers can take steps to help ensure that populations of stream salamanders persist, including by avoiding timber harvests near stream buffer zones. A study by Winsor Lowe and Doug Bolger in New Hampshire’s White Mountain National Forest found that spring salamanders were less abundant in streams where adjacent forests were recently harvested.

Timber harvests near streams often result in stream siltation, which fills the spaces beneath rocks and logs where salamanders hide and hunt. In the southern Appalachian Mountains, researchers estimated that stream buffer zones should extend 250 feet from the stream edge to conserve salamander species. A 2014 study found that riparian canopy gaps as narrow as 40 feet, such as a single powerline cut that crosses a stream, will inhibit salamanders from moving across the gap, and can isolate populations within a stream.

Unfortunately, even with good land management, changes in water quality due to atmospheric pollution can have negative consequences. In Maine’s Acadia National Park, historical data from 1938 to 1987 indicated that northern dusky salamanders were once widespread and common in the park. During intensive surveys of 37 streams conducted from 2000 to 2003, however, researchers observed only two adult northern dusky salamanders in one stream, and had no sightings of eggs or larvae.

The researchers concluded that the decline was due to atmospheric pollutants, which resulted in the mobilization of toxic mercury and aluminum from Acadia’s thin, rocky soils, which have little capacity to buffer industrial air pollutants that blow into our region from the Midwest.

While these conditions are relatively uncommon in our area, maintaining habitat for stream salamanders and other amphibians is critical to their populations – and to that springtime rite of searching for salamanders.

Steve Faccio is a conservation biologist and co-founder of the Vermont Center for Ecostudies. His work focuses on forest ecology, pool-breeding amphibians, vernal pool conservation, and how land use and land management impacts wildlife populations. Illustration by Adelaide Murphy Tyrol. The Outside Story is assigned and edited by Northern Woodlands magazine and sponsored by the Wellborn Ecology Fund of the New Hampshire Charitable Foundation. This piece received additional support from the Arthur Getz Trust, Citizens Bank, N.A.