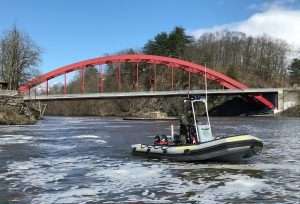 It was one of several incidents where anglers were ticketed for illegal fishing in Warren County.

Later that afternoon, ECO Lapoint patrolled stocked streams in Lake George and located two anglers, one of whom exceeded the limit of trout he could legally catch and the other who did not have a valid fishing license. ECO Lapoint issued tickets to both anglers and reported that he educated the pair about daily limits and how purchasing a fishing license supports fish stocking in New York State.

Later that night, Lt. Higgins and ECO Lapoint teamed up to check on the spawning smelt in the tributaries of Lake George. It is illegal to fish for or possess smelt during the spawning period. While patrolling one of the tributaries in the town of Hague, the Officers reported they located a truck parked next to the brook and noticed a flashlight shining on the water. The ECOs say they quickly apprehended the violators in possession of a net and a bucket of smelt and issued tickets for taking smelt during the closed season.

Photo of ECO Walraven piloting a Zodiac vessel on patrol in the Hudson River provided.