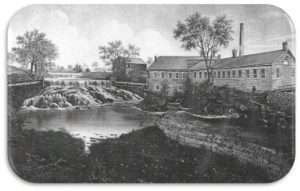 The inaugural video, “Forgotten Crossroads: Rock City Falls,” will debut at Brookside Museum in Ballston Spa on May 3rd at 7 pm.

A quiet hamlet today, Rock City Falls was once a vibrant community. In the 18th and 19th centuries, white settler families from New England and the mid-Atlantic relocated to the fertile land west of the famous springs in Ballston and Saratoga. Those migrants forged new communities and built mills, taverns, schools, stores, churches, and farms.

The 20-minute video features not only local historians like Staulters, but Rock City residents who share their memories and experiences.

“Forgotten Crossroads: Rock City Falls” was developed by the Town of Milton’s Historic Structures and Places Committee, led by Karen Staulters, and produced by Anne Clothier of the Saratoga County History Center. The May 3rd presentation will include a behind-the-scenes look at the creation of the film.

Reservations to attend this event at the museum are available online.