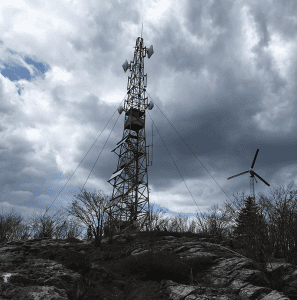 The only viable option for the county, given the widely and most commonly used emergency communications equipment in New York State, is to expand its network of line-of-sight towers powered through utility lines, with emergency backups, and are accessible by motor vehicle for servicing. The south end of Hamilton County has limited police and EMT communications service.

On the south summit of Cathead Mountain, which is private land, there is a firetower that’s been long abandoned by the State, but which has for nearly two decades been used by the State Police as an emergency communications tower powered by a solar array affixed to the firetower and windmill.

Cathead Mountain is north of the Benson Road at the end of North Road, in the Town of Benson, which if you’re driving south on Route 30, is beyond Hope. (If one is driving north from Benson, then the rest of the county is beyond Hope. Bad joke, I know, but it’s a Hamilton County thing.) 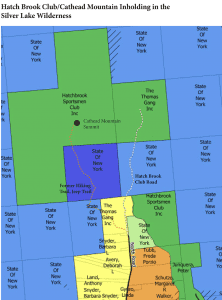 The current installation is serviced by personnel who access Cathead Mountain via a helicopter, and there is a landing pad built on the summit, or on foot, hiking the roughly 1.5 miles. These facilities have been allowed by agreement with the private landowner, the Hatch Brook Club/Thomas Gang, which owns over 800 acres in an in-holding at the south end of the Silver Lake Wilderness.

There has been no public access to Cathead Mountain for two decades, which arguably has the best view in the Southern Adirondacks. Cathead Mountain, which is privately owned, was once a very popular hike, but public access has been prohibited in recent years due to the emergency equipment and frustration by the club members to resolve their access issues.

Hamilton County states that creation of a new emergency communications facility on the north summit of Cathead on club lands will solve its communications problems. Hamilton County has worked with the Club, which is interested in transferring significant acreage to the state in a roughly 6-to-1 land swap, something like 480+/- acres for 80+/- acres.

This would be a complicated deal, but it’s solvable. In this way, Hamilton County would be able, through an easement with the private landowner, to complete its emergency system, by building a road on private lands to the north summit of Cathead Mountain. The private landowner would get enhanced access to its property by getting 80 acres of Forest Preserve and refurbishing an old 0.53-mile road to allow access with motor vehicles. The state would expand the Silver Lake Wilderness Area by nearly 500 acres and re-establish, and make permanent, public access to the trail and summit of Cathead Mountain, as the summit is cleared of all communications equipment and the firetower is be restored as a public recreational amenity. In this way, the summit of Cathead Mountain would be similar to the experience at Blue Mountain, where there is a public firetower and communications towers, or Spruce Mountain in Saratoga County.

The issues outlined above could only happen with a Constitutional Amendment to Article 14, Section 1. This amendment would be complicated, but as with the Township 40 Constitutional Amendment in 2016-2017, complicated amendments can be put together to resolve longstanding problems. The emergency communications situation for Hamilton County and the opportunity to re-establish public access to Cathead Mountain rise to the level of a problem that can only be solved with an amendment.

There are three principal benefits from such an amendment to the public:

1. We understand that the Club has offered to convey 480+/- acres of its 820-acre inholding to the state, by grant, in exchange for 80+/- acres of Wilderness and Primitive lands that includes the 0.536-mile Hatch Brook Road. The 480 acres of swapped lands would presumably be classified as Wilderness and be added to the Silver Lake Wilderness Area. We understand that Hamilton County has also pledged to augment the Club’s lands with another 80-100 acres that would be added to the Forest Preserve at another location.

2. On lands in the vicinity of North Road in Benson, owned by the Hatch Brook Club, the Club would grant a permanent easement to the DEC for a hiking trail to connect to Forest Preserve lands to access Cathead Mountain. This would include an area for a public parking lot and trailhead installations. Another consideration is that the entire public hiking trail, from parking area/trailhead to summit, should be on the Forest Preserve.

3. The Hatch Brook Club would grant a permanent easement to the DEC for access to the summit of Cathead Mountain for public recreation and restoration of the firetower. All communications equipment would be removed from Cathead Mountain.

4. The Club would grant an easement to Hamilton County for access by County personnel in motor vehicles and access for a power line to construct and maintain an emergency communications facility on the north summit.

5. The Hatch Brook Club would grant a conservation easement over its remaining lands that it retains that prohibits all future development and allows Hamilton County to build a road to the north summit of Cathead Mountain through its lands and utilize the summit for an emergency communications tower. This easement would also preclude any future development of the property.

6. This conservation easement would include a right-of-first refusal for the State of New York or its assignee.

7. The easement would include a provision that the summit of Cathead Mountain would be cleaned up and restored and that the firetower and Rangers cabin rehabilitated and opened up for public education and interpretation.

It seems like an agreement could be worked out that meets the needs of Hamilton County, the Club, and the Forest Preserve.

Illustrations: Cathead Mountain Firetower and a map of the Cathead in-holding.