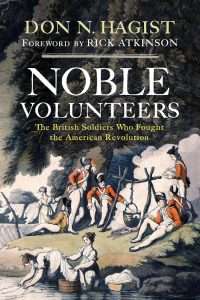 Military histories often focus on battles campaigns, overlooking the soldiers who fought them. Don N. Hagist’s Noble Volunteers: British Soldiers Who Fought in the American Revolution (Westholme, 2020) takes a look at the red-coated soldiers who formed the ranks of the British Army in the 1770s.

Hagist investigates where British soldiers were from, what they did before joining the army, what motivated them to enlist, how they were trained, how they lived in America on campaign and in garrison, and what became of them after the American Revolution.

The Fraunces Tavern Museum will host a free talk with Hagist on his book set for Thursday, April 7th.

This lecture will begin at 6:30 pm and will be held via Zoom. Registration is required and can be completed online.