The Museum Association of New York (MANY) has announced the election of Brian Lee Whisenhunt, Executive Director of The Rockwell Museum as Board President.

Whisenhunt joined MANY in April 2018 and has served as Program Chair and Vice President. He previously served on the board of the Mountain-Plains Museums Association and currently serves on the Museum Advisory Council of the Munson-Williams-Proctor Arts Institute.

Whisenhunt worked in museum education for ten years before beginning his career as a museum director at the Swope Art Museum in Terre Haute, Indiana where he oversaw their successful accreditation by the American Alliance of Museums. Whisenhunt has also served as the Executive Director of the Museum of the Southwest in Midland, Texas where he led a $5.4 million renovation. He joined The Rockwell Museum in January 2017. 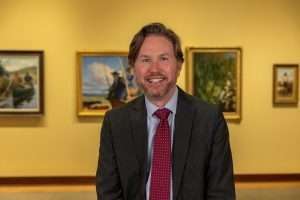 MANY has also announced the election of six new board members and the re-election of four to their second terms.

Victoria Reisman is a curator at the New York State Office of Parks, Recreation, and Historic Preservation’s Bureau of Historic Sites based at Peebles Island Resource Center. She previously served as the curator of the National Museum of Racing and Hall of Fame in Saratoga Springs, where she produced 21 special exhibitions, developed a nationwide juried photography exhibition program, and created a grant-funded gallery space to highlight trophies from the collection. Her museum work experience includes internships in the Learning Services department at the Australian Museum (Sydney, Australia), the curatorial department at the Art Gallery of New South Wales (Sydney, Australia), and the Lehigh University Art Galleries. Reisman is a graduate of Lehigh University (Bachelor of Arts, Design Arts) and the University of Sydney (Master of Museum Studies).

Beth Ann Balalaos is the Access and Inclusion Manager at the Long Island Children’s Museum (LICM). Beth Ann joined the Education Department in 2014 as an intern and began managing the LICM’s IMLS funded “LICM4all” accessibility program in 2016. In this role, she oversees all aspects of accessibility and inclusivity within LICM such as Friendly Hours, Sensory Friendly Performances, the LICM4all App, staff sensitivity training, adapting and creating programming, ADA Compliance, and exhibit modifications. Beth Ann is part of LICM’s Cultural Competence Learning Institute Committee. She has developed and facilitated LICM’s first programming that focuses on the LGBTQIA Community and established its Diversity, Equity, Access and Inclusion Team.

Joshua Ruff is the Deputy Director and Director of Collections & Interpretation at the Long Island Museum of American Art, History & Carriages, in Stony Brook. He is a graduate of Syracuse University with BAs in Broadcast Journalism and in History, and Stony Brook University with a MA in History. He has worked at the Long Island Museum for 24 years including as Curator of its History and Carriage Collections. He has curated more than 60 exhibitions, including, most recently, Fire & Form: New Directions in Glass (2021). In addition to co-authoring several books and exhibition catalogs, his articles have appeared in publications including Magazine Antiques; American Art Review; New York Archives Magazine; American History magazine.

Samantha Hall-Saladino is the Executive Director of the Fulton County Historical Society in Gloversville and serves as the Fulton County Historian. She received her Bachelor’s Degree in History and English from Russell Sage College and a Masters in Museum Studies from the University of New Hampshire. Over the past decade, Samantha has worked with museums across the Capital Region and along the seacoast of New Hampshire, including Strawbery Banke, the American Independence Museum, and the Albany County Historical Association at Ten Broeck Mansion. She serves as a member of the Board of Directors for the Association of Public Historians of NYS (APHNYS) and the Sacandaga Valley Arts Network (SVAN).

Nick Martinez is an educator, producer, podcaster, and activist, from New York City with over a decade of experience working at the intersections of museum education, youth, and workforce development, mentoring, and science. His passion is to engage and support BIPOC to pursue interests and careers in science and develop strategies for the promotion of diversity, equity, and inclusion in traditionally non-inclusive spaces. He began his museum career as an undergraduate intern at the American Museum of Natural History (AMNH) in the Museum Education and Employment Program, designing and leading tours of museum halls for visiting school and camp groups. After graduation, he returned to AMNH as an internship supervisor, helping to supervise the new cohort of college interns, and was later hired to teach genetics, human evolution, and neuroscience in the Hall of Human Origins Teaching Lab, first as a Lab Facilitator and then in a full-time role as the Coordinator of the Lab. He is currently Senior Manager of Youth Initiatives and manages Middle and High School programs, Internship experiences, and Alumni Engagement. He also leads recruitment, community-building, and partnership efforts to increase diversity and promote equity and inclusivity across Youth Programs at the AMNH.

Dr. Callie Johnson is an award-winning marketing, communications, and nonprofit leadership executive. At the Albright-Knox, Dr. Johnson serves in an executive role stewarding the rebranding of America’s sixth oldest art museum, which is in the process of becoming the Buffalo AKG Art Museum. Dr. Johnson is the former Executive Vice President of Marketing for Girl Scouts of Western New York and a current member of the Forbes Communications Council, an invitation-only community for executives in communications, marketing, and public relations. She is the winner of two Buffalo Business First awards — 40 Under 40 and 30 Under 30 — for making a difference both on the job and in the community. She is a Buffalo Niagara 360 Spotlight Professional for her career success and her commitment to strengthening the Buffalo Niagara region. She was awarded three Girl Scouts of Western New York Finance Certificates of Accomplishment and a Commitment to Excellence Award.

Here is a full list of MANY board members:

Photos, from above: 2022 New MANY Board Members; and Brian Lee Whisenhunt.