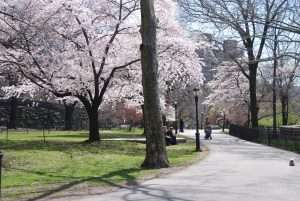 In this program Bracken will take a look at the horticultural history of the park, and the crab-apple and cherry trees that inherit it. Bracken will also talk about the history of the trees in Morningside Heights’s Sakura Park, trees that were a gift from the Japanese government to the city at the beginning of the 20th century.

Margaret Bracken is the landscape architect for Riverside Park. As the sole design professional for the park, she is involved in all design, construction and horticulture throughout the 327 acre park. Her design projects include Soldiers and Sailors Monument Plaza at West 87th Street; the historic granite entry stairs – the Carrere Stairs – at West 99th Street; the restoration of the Robert Ray Hamilton Fountain at West 76th Street; multiple dog runs and playgrounds; and small scale infrastructure repairs.

Bracken has worked on everything from huge projects with a budget of $150,000,000 such as the Rotunda at West 79th Street to the everyday repairs that keep the park in working order, such as replacing sewer covers and fixing fences. And she is a consummate diplomat, having won praise for her handling of the controversial 108th Street skate park project before the required Community Board 7 approval meeting which was described by a local newspaper as a “love fest for Margaret Bracken.”

For more information or to view the program, visit the Bloomingdale Neighborhood History Group’s website.