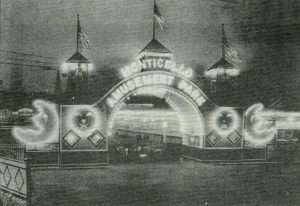 For myriad reasons — perhaps most importantly the influence of the fortress hotels — the amusement park was never a big part of Sullivan County’s tourism industry.

There have been numerous attempts in the county over the years to capitalize on America’s love affair with places like Coney Island’s Luna Park, Disneyland, and Palisades Park, but none that succeeded for more than a few years.

The Monticello Amusement Park, whose elaborate entrance was likely an homage to the popularity of the aforementioned Luna Park, was arguably the most successful of all of the Sullivan County ventures, yet its existence was a bumpy one and relatively short-lived.

It opened for business in 1923, located at the foot of what was once called Maiden Lane (later day Wheeler Street) in the vicinity of the present day Sullivan County Government Center. People sometimes confuse it with the Sullivan County Fair, which was long held in the village of Monticello, but the truth is that it was far different, and in fact is often cited as one of the primary reasons for the annual fair’s demise after 75 years of operation.

At its peak, the Monticello Amusement Park featured a vast number of attractions, including a midway, a swimming pool, a magnificent dance hall that also served as a boxing arena and a basketball court, one of the largest roller coasters in the state, and other rides that were state-of-the-art for their time.

Although records are difficult to find, it seems as if the park operated during the summer season until 1927 or ‘28, then was closed for a year before re-opening. It suffered a devastating fire of suspicious origin in 1932 and was never rebuilt.

The dance hall, with a glittery glass ball hanging over the dance floor, was remembered by many long after its demise, and besides providing a place for young and old to try out the latest dance steps, regularly played host to boxing cards and big-time basketball games, including one notable match-up of two of the eras greatest teams, the Original Celtics and the Renaissance Big Five.

In addition to the dance hall, the park featured a large swimming pool, constructed in 1927 at a cost of $75,000. This, of course, pre-dated the era when nearly every hotel and bungalow colony offered their guests a place to swim. The park also regularly offered fireworks and “open air shows” of many types, including vaudeville acts and circus performers, but it was the array of rides that really set it apart.

The centerpiece of the rides was the Pippin, the roller coaster that was purported to be “the second largest in the state.” Other popular rides included the “aero-plane” and the whip. A concession area offered games of skill and chance, as well as refreshments of virtually every kind.

Despite all of the attractions and investment, and the free spending of the Roaring Twenties, the park seemed to perpetually struggle financially, and was foreclosed on by the Mortgage Guaranty Company of Monticello before the decade was over.

In the spring of 1929 it was purchased by former Army Major Robert Kent, Jr. of the U.S. Circus Corporation, who despite being mired in legal troubles of his own—he had been arrested and charged with violating the Mann Act in December of 1928, jailed, and eventually acquitted — pumped money into improvements and promotion. Despite a large crowd for opening day that season, financial stability was elusive, and before long ownership had changed again.

Problems continued in 1931, when new owner Paul Silberman of Newark, New Jersey, who had reportedly invested $100,000 of his own money in fixing up the park, as well as an equal sum from his investors, was convicted of misappropriating funds he had obtained from the Building and Loan Association of Newark for the purpose of improving the park. Silberman was sentenced to five years in prison. The Monticello Amusement Park never really recovered, and the fire of 1932 closed it for good.

In 1933, the property was put up for sale by the county for unpaid taxes. As late as 1938, it was still being used by local fire departments for fireworks shows and circus performances, and its memory survives today largely because of an abundance of postcards that are still in demand among collectors.

Photo of the entrance to the Monticello Amusement Park.