Nighttime light pollution levels are increasing the most in the southeastern United States, Mexico, and Central America according to findings based on year-round data collected over the last two decades in the Western Hemisphere.

This trend is a real concern for birds that fly at night during spring and fall migration and even during non-migratory seasons. Results of the study by the Cornell Lab of Ornithology and Colorado State University are published in Ecosphere. 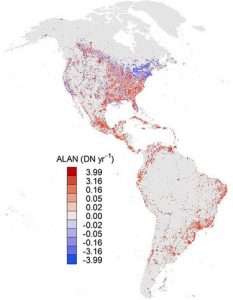 Light attracts and disorients birds during migration, often leading to injury and death after collisions with buildings. The authors found that light pollution levels during the past two decades have gone up over roughly 16% of the land area in the Western Hemisphere, with another 7% of land area experiencing a reduction in light pollution. Declines in light pollution are concentrated in the northeastern United States in conjunction with human population declines and urban decay in large cities.

The study used data from eBird to generate weekly estimates of relative abundance for the 42 study species. eBird is a Cornell Lab citizen-science program in which volunteer bird watchers enter their observations from anywhere in the world. The authors intersected the weekly abundance estimates with satellite-based measures of year-round light pollution compiled over a 22-year period. 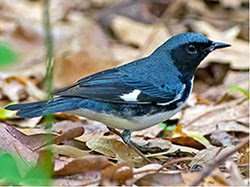 The hope is that by determining where and when birds are likely to encounter existing or increasing light pollution will lead to more effective efforts to reduce risks and increase bird survival.