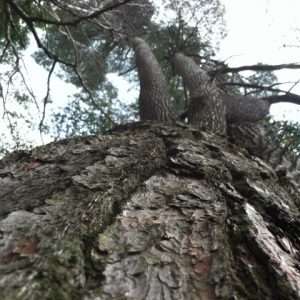 One of the best memories I carry from my vacations at our camp on Twitchell Lake in Herkimer County in the Adirondacks is the white pine that marks the western border of our lake-shore property. It’s massive base peaks with twin tops that tower above all the other trees on our shoreline. Peering up into its heights ignited my boyhood imagination, picturing myself atop the Crow’s Nest of some fast clipper ship, scouting for pirates.

There have been several hurricanes and microbursts that have wreaked havoc with the four plus miles of our lake’s shoreline, but my white pine stands firm still, its roots anchored deep in the ancient glacial fill. Even to this day, my brother Tom and I muse about an observation tower roped between those twin tops where we are poised, binoculars in hand, eye-to-eye with the bald eagles that visit the lake, and the loons that daily jet by. This giant stands well over 150 feet tall. 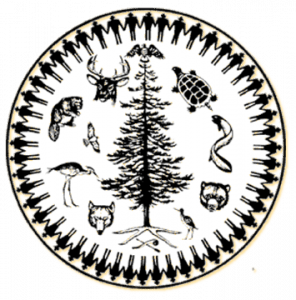 Local indigenous people perceived a deeper spiritual significance in the white pine. It’s said that The Great Peacemaker (Dekanawida, or Tekanawí:ta), who carried a message of peace, friendship, and unity to the Mohawk, Oneida, Onondaga, Cayuga, and Seneca, gathered their chiefs under the branches of a great white pine he had planted – a tree of peace – with roots extending out north, east, south, and west, and its clusters of five needles on each branch symbolizing the five nations joined together as the Haudenosaunee, the Iroquois Confederacy. The Great Peacemaker was aided in this mission by Jigonhsasee and Hiawatha.

Anthropologist Arthur C. Parker, who was born in 1881 on the Cattaraugus Reservation of the Seneca Nation, adds this: “Weapons would be buried under a tree to seal a peace agreement. A tree might even be uprooted to create a cavity for the weapons. The replanted tree on top would become a tree of peace.”

My early interest in logging and preservation pointed me to the white pine, which blanketed parts of Adirondacks wilderness until about 1800. Guided by Bill Marleau’s book Big Moose Station (Self-Published, 1986), we have found five or six old lumber camps within a mile or two of the shores of Twitchell Lake. Like amateur archaeologists, my brother and I have explored the nearest two, marveling at the variety of objects that remain which speak to what life was like for these pioneering lumberman.

The story’s plot thickened as I probed the origins and progress of the logging industry.  In Melissa Otis’s fascinating Rural Indigenousness: A History of Iroquoian and Algonquian Peoples of the Adirondacks (Syracuse Univ. Press, 2018), I found my thesis statement, expressed by her in a simple sentence:  “Industrial exploitation and mass tourism created a tension that initiated the call to save the region from these dueling pressures [logging and mining].” 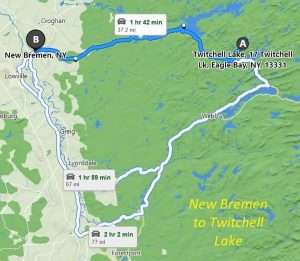 The logging industry that reached Twitchell Lake in the 1880s began in early Lewis County villages more than 40 miles to the west. Mill owners in Croghan and New Bremen pushed up the Beaver River and its feeders (Twitchell Creek one of them), first for the softwood (pine, spruce, fir, or hemlock) and later for the hardwood (maple, beech, or birch). These logging operations bought huge parcels of land in John Brown’s Tract and the Totten & Crossfield Purchase, where Twitchell is situated.

The White Pine and Timber Before 1800 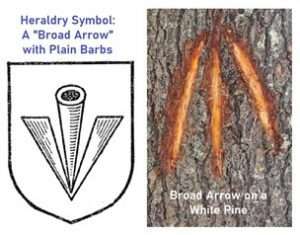 The botanical name for the eastern or northern white pine is Pinus strobus, the Latin literally translating as “Pine (pine)cone.” Old growth stands of this conifer originally covered much of north-eastern and central North America, Appalachia, and Canada west through and including the Great Lakes Region. Henry David Thoreau enthusiastically exclaimed of the white pine – “There is no finer tree!”

As the tallest tree across that wide swath of territory, early colonial specimens reached 240 feet or more in height, 8 feet in diameter, and had a lifespan of over 400 years. Captain George Weymouth of the British Royal Navy was so taken with this tree that he transplanted it by seed to his homeland in 1620, where forests had already been depleted.

No other tree has had as great an economic impact on a nation as that of the white pine on the United States. It was used for almost anything made of wood, including homes, carriages, looms, furniture, matches, bridges, and ships. Surprisingly, the eastern white pine played a significant role in the events leading to the American Revolution.

Consensus in scientific circles has the white pine as an early successional species that will germinate and flourish in areas of full sunlight, such as a lakeshore, a burned-over section, or a logged area. Hardwood species like oak, birch, and beech are later successional species that can reproduce in the shade, becoming predominant later in a forest’s development. William F. Fox in his History of the Lumber Industry in the State of New York documents numerous firsthand sources on the composition of the primitive forest, quoting an early authority for New York as “essentially a white pine State”:

The return of the white pine today follows in the wake of logging and forest fires, whereas there is ample evidence for extensive stands of white pine along all rivers and lakes throughout the state before 1800.

King William II declared dominion over New England and New York’s forests, sending his surveyors to mark the choicest white pine with “the broad arrow,” reserving the best trees as masts for the Royal Navy. American colonists resented this and logged these for their own building needs. The conflict came to a head in the Pine Tree Rebellion of 1772, as a New Hampshire sheriff was attacked by an angry mob after he arrested mill owners for illegal possession of “mast trees.”

The Minutemen at Bunker Hill carried a flag emblazoned with the white pine, more a symbol of revolution than the musket, or tea. During and after the Revolution, large white pines were felled to build the U.S. Navy’s first ships. By 1800 nearly all the white pine on the Adirondack periphery was gone and lumbering interests setting their sights on the interior. It’s estimated that a just one percent of the virgin stands remain. 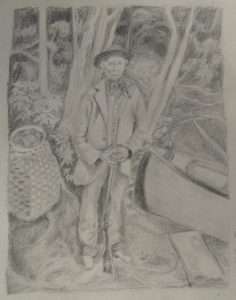 Melissa Otis’ research counters a long-standing myth that Native American presence in the Adirondacks simply disappeared. She tracks the deeds and activities of key entrepreneurial families like that of Abenaki Chief Jules Denis and his spouse Cleophie Obomsawin of Old Forge, and noted Abenaki guide Mitchell Sabattis (1823-1906) of Long Lake.

The former produced work and decorative baskets from black ash tree splint and sweetgrass for sale through local stores. The latter served as a wilderness guide for homesteaders, industrialists, surveyors, scholars, and sports hunters. According to his father, Mitchell Sabattis worked with two American guides to craft the first Adirondack guide boat. “Together, these Adirondackers probably created a new boat design and Euroamerican guides adopted the use and making of the pack-basket thought to be introduced to the area by the Abenaki,” Otis concludes.

Other Native American crafts made from a variety of Adirondack trees included snowshoes, cane furniture, canoes, and a wide collection of household goods. Indigenous people took part in  lumbering, tanning, railroad, forest products, and tourism industries. Pre-1800 Iroquois mixed white pine resin with beeswax to seal their birchbark canoes. Other Native Americans used the white pine for medicinal purposes, boiling the bark to drink as a cough suppressant or pouring it over gangrenous wounds.

The Algonquian speaking nations collected the inner bark of white pine (and other species) when food was scarce: “The white soft inner bark (cambrial layer) was carefully separated from the hard, brown bark and dried. When pounded this product can be used as flower or added to stretch other starchy products.”  “Ha-de-ron-dah,” from which the work Adirondack is derived, is said to be the Mohawk word for “bark-eater,” used to demean this Algonquian practice. 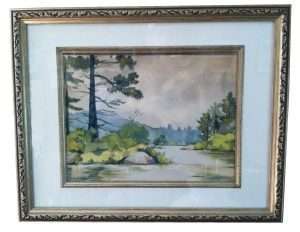 My parents were married in New York City in 1941 and honeymooned at their Twitchell Lake cabin that fall. A trained artist, my mother painted a watercolor looking off to the northern end of the lake, a towering white pine dominating a peninsula. In fact, white pines circle our lake-shore, preserved to this day. A 1907 deed anticipates the removal of all the softwood trees here before lots were sold off as cottages and cabins. Fortunately, the “party of the first part” got bogged down in a lawsuit with the lumbering company and they were mostly saved. Paul Crouch, a historian of Twitchell Lake, made this comment about our old growth shoreline:

“The provision about no lumbering close to the lakes, together with the fact that the Nobles and the Herbens bought and kept for more than sixty years almost a mile of virgin shoreline, has made the east shore of Twitchell … one of the most beautiful shores in the Adirondacks. Some of the spruces run well over two hundred years old, as I discovered when half a dozen of mine went down in the 1950 blowdown.”

Crouch is referring here in his first sentence to the Webb Covenant which William Seward Webb enshrined in all the deeds for lots around Twitchell, Big Moose, and Fourth Lakes, when a Mr. Thistlethwaite purchased all these prime parcels from his boss. The legal action on Fourth Lake resulted when Thistlethwaite violated one of the terms of that Covenant, that lumbering should not take place within a half mile of any shoreline.

These “exceptions” in the deeds left a “virgin” stand of soft and hardwood trees that forms as beautiful a shoreline as any in the Adirondacks. Among them stands an amazing white pine leaning over the water at a thirty-degree angle, as if defying the law of gravity. It is a truly amazing sight to see!

This is the first in a series of essays about logging and conservation in the Adirondacks around Twitchell Lake in Northern Herkimer County. You can read the entire series here.


Illustrations, from above: picture of “My white pine” by Noel Sherry; White pine Symbol of Iroquois Nation; Google Map of Routes from Twitchell Lake (A) to New Bremen (B) in Lewis County; symbols for the “Broad Arrow” in Heraldry & on a white pine; Pencil Sketch of Mitchell Sabbatis with Gun, Pack Basket & Guide Boat by Noel Sherry; Twitchell Lake Watercolor by Elizabeth E. Sherry done in Summer (between 1942 and 1948); and exceptions to Deed Executed in 1907 by William Thistlethwaite to Patrick Harney for Lots 130-171 on SW Shore of Twitchell Lake.