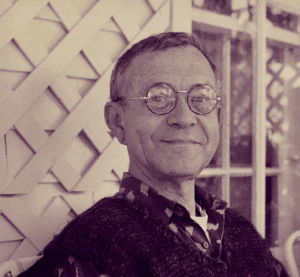 Manhattan artist George Deem is remembered for referencing the history of painting by re-imagining Old Masters in a contemporary context. He re-configured iconic pictorial images through visual ploys such as repetition and erasure, or through the addition of components of contemporary life and art.

Born in 1932 in Decker, a small town in rural Indiana, Deem grew up on a cantaloupe melon farm. Having finished his schooling, he enrolled in the School of the Art Institute of Chicago in 1952. Drafted into the army in 1953, Deem was stationed in the German university town of Heidelberg with its elegant Baroque architecture. During his two years in service, he was able to visit Florence, Venice, Paris, and London.

In 1955 he returned to Chicago to complete his course at the Art Institute where he studied with Paul Wieghardt, a refugee German artist who had become an influential Professor of Figurative Painting at the Institute.

Following his graduation, Deem settled in New York where he combined his creative work with a job in the display department of The Metropolitan Museum of Art. The Masters stared at him from every angle.

Living and working for most of his life at 10 West 18th Street in Manhattan’s Flatiron District, Deem started his career during the heyday of Abstract Expressionism. Finding his own way, he developed a highly personal style which he called “Compositions with Illustrations” through re-imagining and re-organizing masterworks of the past. By collapsing traditional notions of time and space, older paintings were recycled into a new and original works.

Playing with the Past 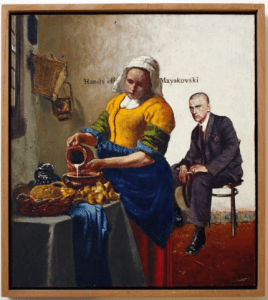 With great skill, theatrical imagination and playful humor, Deem reconstructed the art of the past. Between the time he arrived in New York in 1958 until his death in 2008, critics have been unable to pigeon-hole his presence under the label of any available -isms. His re-blending of art history has variously been described as quotation, paraphrase, collage, montage, or appropriation.

Among the painters whose work he “adopted” were Caravaggio, Chardin, Ingres, Goya, Matisse, John Singer Sargent, Winslow Homer, and Picasso. The artist he admired more than any other was Johannes Vermeer. He expressed this passion in paintings in which he juxtaposed or re-interpreted works by the Dutch master. Amongst his various variations on themes by Vermeer, one painting stands out. In 1980 Deem created “Mayakovsky in a Bulldozer in Vermeer’s Small Street in Delft” (in 2003 he shortened the title to “Mayakovsky in Delft”).

For a number of years Deem, like a number of New York’s avant-garde artists, had been fixated by the life and work of the Soviet poet (his 1977 painting “Hands of Mayakovsky” depicts him sitting in the room where Vermeer’s maid is pouring milk). In a broad sense, one may interpret this strangely appealing painting as a metaphor for the modernist undertaking of driving a bulldozer through the museum of revered art.

More specifically, however, this work seems to highlight the difficulties Vladimir Mayakovsky and fellow Russian avant-garde artists experienced in the highly charged political atmosphere of the twentieth century’s first decades.

During the years preceding the October Revolution, Russian art and literature (and ballet) were marked by modernist experimentation which resulted in a distinct cultural diversity. It emerged out of the cafés and cabarets of the mid-1910s.

Revolutionary violence did not dam the tide. With the Bolshevik seizure of power began a process of social renewal. Amidst political tumult, the arts thrived and were part of the political debate. 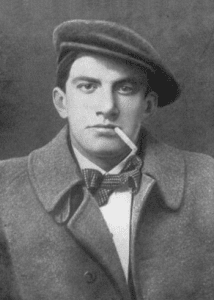 Vladimir Mayakovsky was born in 1893 in Baghdati in present-day Georgia (now in the Russian Federation). The family moved to Moscow after his father’s premature death, living in great poverty during this time. As a young man, he was imprisoned on three occasions for subversive activities. It was the start of a lifelong involvement with politics.

In 1909, during a period of solitary confinement, he began writing poetry. On his release, he joined the Moscow Art School and became involved with members of the Futurist movement who gathered at the Poets’ Café in Moscow.

Located in an old laundry just off Tverskaya Street, the property was also a meeting place for anarchists. With sawdust on the floor, wooden tables, and a small stage, the place was turned into a nightclub that based itself on the European cabaret tradition with songs, recitations, dramatic scenes, and verbal interactions with the audience.

Slap in the Face 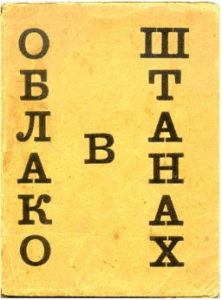 On December 15th, 1912, David Burliuk and associates (including Mayakovsky) published a Futurist manifesto entitled A Slap in the Face of Public Taste. It starts with a familiar claim: “We alone are the face of our Time. Through us the horn of time blows in the art of the word. The past is too tight. The Academy and Pushkin are less intelligible than hieroglyphics. Throw Pushkin, Dostoevsky, Tolstoy, etc., etc. overboard from the Ship of Modernity.”

Both Burliuk and Mayakovsky were expelled from the Moscow Art School in 1914 because of political agitation. The work published during the period preceding the Russian Revolution established the latter’s reputation as a poet. His first major poem “A Cloud in Trousers” (1915: published in yellow wrappers) dealt with issues of love, revolution, religion, and aesthetics. In this work Mayakovsky introduced street jargon, thus attacking persisting idealistic notions of poetry.

At the height of unrest in Russia, Mayakovsky was in Smolny, Petrograd. From there he witnessed the October Revolution. The impressions of insurrection deeply influenced his artistic and political development. In the following years, he became the celebrated poet of the Soviet Union.

Much has been made of the dualistic nature of his work. While Soviet literary critics have stressed his sociopolitical message, commentators in the West tended to emphasize the lyrical nature of his poetry. One of the intriguing aspects of early artistic enthusiasm for Bolshevism was that the lyrical and political did not exclude one another and – in many cases – tended to merge. 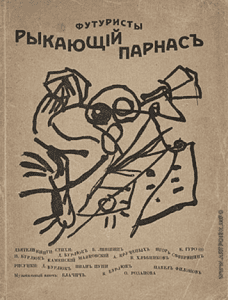 In his Slap in the Face manifesto, Burliuk had introduced a metaphorical “Ship of Modernity.” The timing of publication was significant: December 1912 – a few months after the sinking of the RMS Titanic. In the aftermath of that fateful journey, intellectual narratives were shaped around the notion of shipwreck. Commentators speculated that the sinking of the “arrogant” ship might be a presage of the approaching fate of Western civilization.

Soon the Russian Ship of Modernity would hit the iceberg of Stalinist ideology. Cosmopolitan art movements were curtailed and creative freedoms killed off. Following the repression of anarchist movements and the persecution of their members and supporters, David Burliuk escaped to the United States, eventually settling on Long Island where he became part of the Hampton Bays Art Group of émigré painters.

For a long while, Mayakovsky had identified the literary vanguard with sociopolitical change. From 1922 to 1928, he was a leading member of the Left Art Front. In 1925, he visited New York and wrote a series of articles about his impressions which were published as My Discovery of America.

However, towards the end of the 1920s he became disillusioned with Stalin’s political course of artistic repression. On April 14th, 1930 he shot himself.

In 1925 James Cummings and John Earl Mcleod patented an “Attachment for Tractors” they had developed in the County of Washington, Kansas, for use as an earth-mover. The machine became known as a bulldozer. During the 1930s the term indicated a demolition vehicle used for flattening and leveling.

In 1931, the Caterpillar Company changed the paint color of its tractors and other machines from battleship grey to Hi-Way Yellow. Other companies followed suit. Yellow become the standard color of the demolition industry. The color was also indicative of aesthetic fashions of the late nineteenth (the “Yellow Nineties”) and early twentieth centuries. There is the immediate association with Vincent van Gogh’s paintings. Published in London, The Yellow Book was a quarterly magazine associated with its art editor Aubrey Beardsley. The avant-garde was cloaked in yellow.

The word bulldozer itself had a troubled history. First recorded (in the plural) during the chaotic 1876 presidential election in a nation still divided and scarred by the Civil War, the term referred to supporters of the Democratic Party who colluded to undermine the 15th Amendment (1870) and disenfranchise formerly enslaved African-American voters. The bulldozers used threats and acts of violence in order to prevent them from casting their ballots for candidates of Abraham Lincoln’s Republican Party.

The use of the verb “bulldoze” followed soon. Noun and verb became generic terms for coercion and intimidation. There is an obvious link to the English word “bully” in the sense of a person who persecutes or intimidates weaker people.

The technical term for the giant machine was adopted into many languages, including Russian. The verb acquired an ominous connotation once it was applied in the wider context of cultural intimidation and artistic intolerance. During the 1930s Russian modernism was bulldozed into rubble – but there is an ironic and painful twist to this tale. 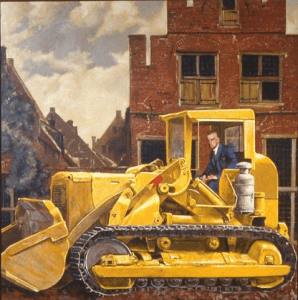 In 1932, the year of Deem’s birth, the Soviet Communist Party adopted the resolution “On the Restructuring of Literary and Artistic Organizations” which led the formation of the Union of Artists and Union of Writers. All artistic groupings were banned apart from those that promoted Social Realism. The avant-garde was silenced and exiled. Modernism had created a culture of clearance before being razed to the ground itself by the bulldozer of authoritarianism.

On a wet mid-September day in 1974, in a soggy field near to Moscow’s Belyayevo metro station, a number of avant-garde artists led by Oscar Rabin and Evgeny Rukhin organized an unofficial exhibition of their work. The happening was scrutinized by the KGB on behalf of the Union of Artists and broken-up by police with water cannons and bulldozers. Since the organizers had invited a number of journalists and photographers, the carnage was communicated all over the world. The event became known as the “Bulldozer Exhibition.”

The after-effect was astonishing. The regime changed its policy directives. Party officials gave permission to stage the first-ever contemporary art show in the Soviet Union. The happening took place on September 29th, 1974, in Izmaylovo Park, Moscow. After a period of more than four decades, the harsh era of censorship and surveillance seemed to come to an end. The ice was melting; a Moscow Spring was imminent.

The bulldozer had done its job. A vehicle of destruction was transformed into a victorious symbol of resistance. Perestroika and glasnost became key words in an impatient yearning for reform. Celebrating the joy of creativity, artists and journalists appeared to regain freedom of expression.

It was a false dawn. The bright future did not arrive and liberation from the Soviet mind-set never occurred. Vladimir Putin reversed the trend by systematically dismantling the independent media, monopolizing the flow of information, and suppressing artistic self-determination. Before our un-watching eyes, the process of Stalinization had been set back into motion.