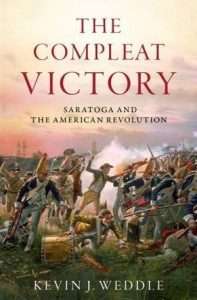 Since 1972, the Fraunces Tavern Museum Book Award has been presented annually to the author of the best newly published work on the American Revolutionary War, combining original scholarship, insight, and good writing.

This award is one way the Museum fulfills its mission to educate the public about the Revolution and acknowledge the historical community dedicated to the study and public education regarding the Revolution.

The Museum and the Sons of the Revolution will host a Battles of Lexington and Concord Dinner and the Fraunces Tavern Museum Book Award Presentation on Monday, April 25th.

The Award will be presented to Kevin J. Weddle for his book The Compleat Victory: Saratoga and the American Revolution (Oxford University Press, 2021).

Weddle is Professor of Military Theory and Strategy and the Elihu Root Chair of Military Studies at the US Army War College. He is a graduate of West Point and served over 28 years as a combat engineer officer before retiring as a colonel. He served in a variety of command and staff positions in the United States and overseas including command of a combat engineer battalion and is a veteran of Operations Desert Storm and Enduring Freedom. Colonel Weddle holds master’s degrees in history and civil engineering from the University of Minnesota and a Ph.D. in history from Princeton University. The Compleat Victory is his second book. He lives in Carlisle, Pennsylvania with his wife, Jeanie.

The Compleat Victory: Saratoga and the American Revolution looks back to the late summer and fall of 1777, after two years of indecisive fighting on both sides, when the outcome of the American War of Independence hung in the balance. Having successfully expelled the Americans from Canada in 1776, the British were determined to end the rebellion the following year and devised what they believed a war-winning strategy, sending General John Burgoyne south to rout the Americans and take Albany.

When British forces captured Fort Ticonderoga with unexpected ease in July of 1777, it looked as if it was a matter of time before they would break the rebellion in the North. Less than three and a half months later, however, a combination of the Continental Army and Militia forces, commanded by Major General Horatio Gates and inspired by the heroics of Benedict Arnold, forced Burgoyne to surrender his entire army. The American victory stunned the world and changed the course of the war.

John Knight was born on Nottingham England and educated at Warwick University where he read America History and Politics. He was trained in Fine Art appraisal by Christie’s in London and worked as a Victorian painting specialist. He regularly contributes to a number of history publications including the journal of the American Revolution. War at Saber Point is John’s first book. A confirmed Americanophile, he lives for four months of the year in New York’s Hudson Valley.

War at Saber Point: Banastre Tarleton and the British Legion takes a look at the British Legion, one of the most remarkable regiments, not only of the American Revolution, but of any war. A corps made up of American Loyalists, it saw its first action in New York and then engaged in almost every battle in the Southern colonies. Led by a twenty-four-year-old libertine who purchased his commission to escape enormous gambling debts, the Legion gained notoriety for its ruthless tactics. Excelling in “special operations,” they frequently overwhelmed the Continental forces they fought, becoming the most feared British regiment of the war.

Patrick K. O’Donnell, The Indispensables: The Diverse Soldier-Mariners Who Shaped the Country, Formed the Navy, and Rowed Washington Across the Delaware (Atlantic Monthly Press, 2021).

Patrick K. O’Donnell is a bestselling, critically acclaimed military historian and an expert on elite units. The author of 12 books and a Fellow at Mount Vernon, he is the recipient of many national awards. O’Donnell served as a combat historian in a Marine rifle platoon during the Battle of Fallujah and is a professional speaker on America’s conflicts, espionage, special operations, and counterinsurgency. He has provided historical consulting for DreamWorks’ award-winning miniseries Band of Brothers and for documentaries produced by the BBC, the History Channel, and Discovery.

The Indispensables: The Diverse Soldier-Mariners Who Shaped the Country, Formed the Navy, and Rowed Washington Across the Delaware looks back to the stormy night of August 29th, 1776, when the Continental Army faced capture or annihilation after losing the Battle of Brooklyn. The British had trapped George Washington’s forces against the East River, and the fate of the Revolution rested upon the shoulders of the soldier-mariners from Marblehead, Massachusetts. Serving side by side in one of the country’s first diverse units, they pulled off an “American Dunkirk” and saved the army by transporting it across the treacherous waters of the river to Manhattan.

In the annals of the American Revolution, no group played a more consequential role than the Marbleheaders. At the right time in the right place, they repeatedly altered the course of events, and their story shines new light on our understanding of the Revolution. As acclaimed historian Patrick K. O’Donnell dramatically recounts, beginning nearly a decade before the war started, and in the midst of a raging virus that divided the town politically, Marbleheaders such as Elbridge Gerry and Azor Orne spearheaded the break with Britain and shaped the nascent United States by playing a crucial role governing, building alliances, seizing British ships, forging critical supply lines, and establishing the origins of the US Navy.

The Marblehead Regiment, led by John Glover, became truly indispensable. Marbleheaders battled at Lexington and on Bunker Hill and formed the elite Guard that protected George Washington. Then, at the most crucial time in the war, the special operations–like regiment, against all odds, conveyed 2,400 of Washington’s men across the ice-filled Delaware River on Christmas night 1776, delivering a momentum-shifting surprise attack on Trenton. Later, Marblehead doctor Nathaniel Bond inoculated the Continental Army against a deadly virus, which changed the course of history.

White, Black, Hispanic, and Native American, this uniquely diverse group of soldiers set an inclusive standard of unity the US Army would not reach again for more than 170 years. The Marbleheaders’ chronicle, never fully told before now, makes The Indispensables a vital addition to the literature of the American Revolution.

Woody Holton, Liberty Is Sweet: The Hidden History of the American Revolution.

Woody Holton is McCausland Professor of History at the University of South Carolina, where he teaches and researches Early American history, especially the American Revolution, with a focus on economic history and on African Americans, Native Americans, and women. He is the author of several previous books, including Abigail Adams, which was awarded the Bancroft Prize; his second book, Unruly Americans and the Origins of the Constitution, was a finalist for the National Book Award.

Liberty Is Sweet: The Hidden History of the American Revolution is a sweeping reassessment of the American Revolution, showing how the Founders were influenced by overlooked Americans — women, Native Americans, African Americans, and religious dissenters. Using more than a thousand eyewitness accounts, Liberty Is Sweet explores countless connections between the Patriots of 1776 and other Americans whose passion for freedom often brought them into conflict with the Founding Fathers.