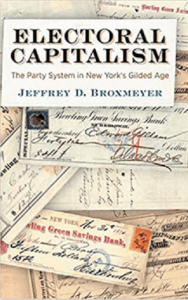 On this episode of Empire State Engagements, a conversation with Dr. Jeff Broxmeyer of the University of Toledo about his book Electoral Capitalism: The Party System in New York’s Gilded Age (University of Pennsylvania Press, 2020).

In Electoral Capitalism, Jeffrey D. Broxmeyer reappraises the controversy over wealth inequality, and why this period was so combustible. As ranks of the dispossessed swelled, an outpouring of claims transformed the old spoils system into relief for the politically connected poor.

A vibrant but scorned culture of petty office-holding thus emerged. By the turn of the century, an upsurge of grassroots protest sought to dislodge political bosses from their apex by severing the link between party and capital.

You can view the episode here.

Empire State Engagements is a long-form interview program created and hosted by Dr. Robert Chiles. It features conversations with historians of all aspects of New York State. Visit www.empirestateengagements.com for a full list of episodes.