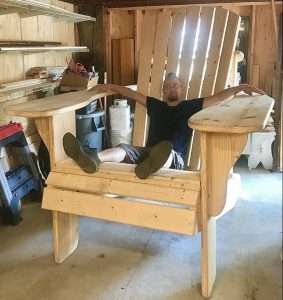 The Arts District of Glens Falls has announced plans to unveil the latest installment of public art during the Glens Falls Collaborative’s Wing Fest, held from noon to 3 pm on April 30th in Downtown Glens Falls. The unveiling ceremony with remarks by the artist, sponsor, and the Arts District will be held at 1 pm.

The installation is an oversized photo-op Adirondack chair, created by Adirondack Folk School, painted by artist Anthony Richichi, and sponsored by Michael and Kathy Clarke. It will be placed on the sidewalk outside of Barton Mines, near the roundabout in downtown Glens Falls.

Richichi is an accomplished award-winning artist, most recently publishing a children’s book called Colorworld, the latest in more than 30 books featuring his art. His most recent awards are 1st place for Best Local Artist in the Post-Star’s 2021 Best of the Region, and a Moonbeam National Book Award with Saratoga Springs Publishing.

His artwork is featured in three feature-length films with award-winning directors, and his freelance clients include Marvel, 20th Century Fox, and Hall of Fame rock band Kiss. He is also a solo exhibited painter, Art Director of GEM Festival and the Gallery Director for Adirondack Theatre Festival and Adirondack Film Festival. His website is www.tonykillustrator.com.