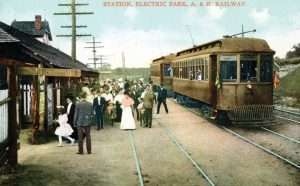 The Hudson Area Library, in partnership with Columbia Friends of the Electric Trail, have announced an exhibit on the interpretative panels along the Electric Trail in Columbia and Rensselaer counties, set to open on Saturday, May 7th. The exhibition runs through June 30th.

An opening reception will be held from 3 to 5 pm in the Community Room of the library, and will feature an introduction by Matt Kierstead, who provided the documentation and interpretive services for the Electric Trail panels, to the history and conversion of this train line.

As part of the Library’s local history series, Kierstead will return on Thursday, May 26th, from 6 to 7:30 pm to discuss this project in more detail in his talk “Trolleys, Trails and Tales: Interpreting the Empire State Trail’s Albany-Hudson Electric Trail.” This program will be held in person at the Community Room of the library.

The May 26th illustrated talk will look at the corporate, social, and technological history of the “Albany-Hudson Fast Line” electrified high-speed interurban railway in Columbia and Rensselaer counties. It also tells the story of Hudson River Valley Greenway’s conversion of the surviving trolley line right-of-way into the Empire State Trail’s “Albany-Hudson Electric Trail” segment. Finally, Kierstead will discuss the process of developing the trailside interpretive signage that explains the history of the railway, the communities it passed through, and historical features visible from the trail to the trail’s users.

In addition to the interpretative panels, this exhibition also features images from Larry Gobrecht’s collection on the Electric Park in Kinderhook. The Electric Park was an attraction on Kinderhook Lake that was along the trolley line that ran from Albany to Hudson from 1901 to 1920. Gobrecht retired as historian in the Recreation and Historic preservation office of the New York State Office of Parks and currently serves on the board of the Friends of Taconic State Park. The Gobrecht family has generously donated the rights to the digital images of this unique collection for use by the library.

The Hudson Area Library is located at 51 North Fifth Street in Hudson. For more information visit their website or call (518) 828-1792.