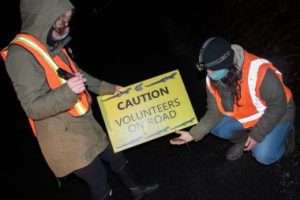 Throughout the Hudson Valley, community volunteers are getting out their flashlights, reflective vests, and rain gear in anticipation of annual amphibian breeding migrations, which typically begin in mid-March. Volunteers will document the migration and help salamanders and frogs as part of DEC’s Amphibian Migrations and Road Crossings Project.

Now in its 14th year, DEC’s Amphibian Migrations and Road Crossings Project was initiated by the Hudson River Estuary Program and Cornell University to raise awareness about critical amphibian habitat, engage volunteers to help collect data on the annual migration, and reduce amphibian road mortality. More than 800 volunteers have participated in the effort since 2009, and helped move an estimated 27,390 salamanders, frogs, and toads safely across roads.

In the coming weeks, as temperatures rise and snow melts, forest species like wood frog (Lithobates sylvatica), spotted salamander (Ambystoma maculatum), and Jefferson-blue spotted salamander complex (Ambystoma jeffersonianum x laterale) will emerge from underground winter shelters and head to vernal pools for breeding. Vernal pools are small, temporary wetlands in the forest that are critical breeding habitat for these amphibians. The pools hold water until summer, so the adult amphibians must gather, breed, and deposit eggs early enough to ensure their aquatic young can hatch, grow, and leave the pools before they dry up.

The timing of migration is weather-dependent and in the Hudson Valley, with concentrated activity on the first warm, rainy nights in March, after the ground has thawed and night air temperatures remain above 40 degrees Fahrenheit. The suitability of migration conditions varies throughout the Hudson River estuary watershed, but when it’s just right, there can be explosive “big night” migrations with hundreds of amphibians on the move. On their journeys between forest habitat and breeding pools, these amphibians often need to cross roads, where mortality can be high even when traffic is low.

Safety is critical, and project volunteers are expected to take all necessary precautions. Volunteers are advised to wear reflective safety vests and headlamps to increase visibility on dark roads, and should not interfere with passing vehicles. Amphibian safety is also important, and frogs and salamanders should only be handled with care and clean hands, free of hand sanitizer, lotion, and other substances that can be toxic to amphibians’ porous skin.

For more information, including a short video about amphibian migrations, visit DEC’s website. DEC held a virtual training for volunteers in February with 105 participants. New Yorkers interested in volunteering to participate in this annual event are encouraged to watch a series of training videos on YouTube and read the Volunteer Handbook. In addition, potential volunteers can access a recording of the training and use materials available on the project website to learn more, including where groups in the Hudson Valley are helping to organize local volunteers.

Project volunteers are encouraged to use the hashtag #amphibianmigrationhv in their photos and posts on social media.