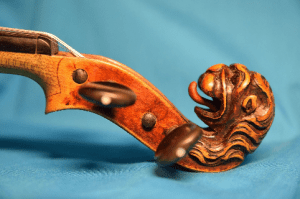 Thomas Jefferson, America’s first Ambassador to France and the nation’s third President, developed a liking for the more genteel aspects of life in Europe. The man who requested that a cellar be constructed at the White House, has been named the first American wine connoisseur. He ordered his supplies directly from the finest French vineyards.

Jefferson also had a passion for music and was a devoted violinist. As part of his early ‘gentlemanly’ education he had been taught to play the instrument. Later in life he compiled a music library at his Monticello estate in Charlottesville that contained works by Vivaldi, Corelli, and Handel, and compositions by contemporaries such as Haydn and others.

Jefferson held a copy of Francesco Geminiani’s The Art of Playing on the Violin (1751: published in London where the Lucca-born musician had settled) which to this day remains a source for the study of late Italian Baroque performance practice. Its author was a first-rate violinist who advocated the ample use of vibratos and the expressiveness of his play was widely admired (the prominent music critic Charles Burney was an enthusiast). Francesco was considered something of a musical deity, deemed to be the equal of Handel. The fact that Jefferson owned a copy of the manual proves the fact that he was aware of the topical debate on how to play the violin.

During his lifetime Jefferson owned several violins, the finest of which may have been an Amati, made in Cremona, Lombardy, in the seventeenth century. During his stay in Paris in the 1780s, he probably purchased a bow produced by François Tourte. Its revolutionary design (which has remained the accepted standard ever since) made it easier for him to play the complex music of Archangelo Corelli, his favorite composer.

Jefferson however was an exceptional, or at least a rare case in America. A widening of interest in the European tradition of making and playing the violin did not take place until the second half of the nineteenth century and coincided with the mass exodus from the German-speaking territories to the United States during the 1850s.

Jacob Stainer was born around 1619 in Absam, near Innsbruck, where he spent most of his working life. From there he single-handedly defined the shape and style of Austro-German violins for the next two hundred years. Throughout the seventeenth and eighteenth century, his work was consistently valued on a par with that of the Italian Amati family.

There was a lively alpine tradition of lute making. The vital materials were locally available as spruce tone-wood was collected from the mountains and nearby forests supplied the hardwood for the necks and backs of the instrument. With the passing of time, the skills of lute building were translated into violin making. In spite of that, it is not clear how and where Stainer learned the secrets of his trade. He possibly spent a period of apprenticeship in Cremona. Whatever the case may be, he developed a level of sophisticated workmanship.

Stainer’s highly personal instruments were typified by a relative broad lower back, delicately cut scrolls, skillfully carved heads (angels, lions, or women), and a varnish that ranged in color from amber to orange-red.

The violin became associated with the Alps. There were hordes of traditionally trained workmen in local villages ready and able to churn out cheap imitations. Over time the quality of their products declined. Increased competition within an overcrowded profession forced many artisans to take their skills elsewhere.

Movement of expertise was further encouraged by the numerous courts in a fragmented region. Each Royal Court took pride in its own orchestra that performed at church services and state festivities. Many instrument makers were employed in palatial activities (often in a dual position of musician and luthier).

After the collapse of the 1848 uprisings in various states, the 1850s became a period of extreme political reaction. Political unrest and police suppression had an adverse effect on economic life. Depression and decline went hand in hand. The young and the strong looked for a way out of the malaise. In that decade alone, nearly one million Germans sailed to America. Rumors about economic prosperity in the United States motivated many craftsmen to seek new opportunities. Amongst them were a number of instrument makers.

The establishment of symphony orchestras and musical establishments in expanding American cities increased not only the demand for musicians, but also the search for instrument makers and repairers. For a while the vast majority of instruments were imported from Europe, but those were rarely up to the standard demanded by professional musicians. There was an urgent need for well-trained practitioners to fill the gap and for entrepreneurs willing to take risks.

This “vacant” domain offered an opening to pioneering settlers such as Heinrich Steinweg, founder of the piano company Steinway & Sons in 1853. That same year saw the arrival in Cincinnati, Ohio, of Rudolph Wurlitzer whose business was greatly facilitated by the outbreak of the Civil War when he became a leading supplier of brass instruments and drums to the military.

Simultaneously, the making of instruments of the string family took off in the United States. What previous had been a folk art of making fiddles became a respected craft of creating classical string instruments. 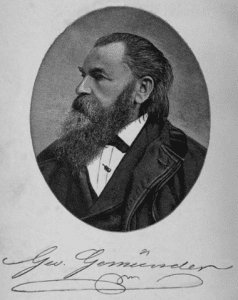 Johann Georg Gemünder was a violin maker to the court of Prince Hohenlohe at Ingelfingen in the Kingdom of Württemberg. He trained his sons August (the eldest) and Georg in his workshop, whilst Albert, the youngest of the three, studied organ making.

After their father’s death in 1835, August continued running the firm whilst Georg gained further work experience in Munich and Vienna, before being admitted around 1843 to the workshop of Jean-Baptiste Vuillaume at 46 Rue Croix des Petits-Champs, Paris, who was Europe’s most prestigious violin maker at the time.

A highly talented craftsman, Vuillaume had studied the great tradition of Cremona violins in depth. Contemporaries defined his workmanship as a “French interpretation of Stradivari.” He was also gifted with a shrewd sense of entrepreneurship. 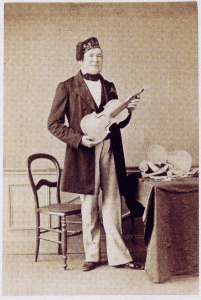 From 1827 onward he began applying technical characteristics of Lombard instruments to his own production of “antiqued” violins. He was precise in the selection of woods and varnishes, and only employed the best craftsmen who were hired from his native Mirecourt (in the Vosges department of Lorraine) which, until the mid-twentieth century, was renowned for the manufacture of stringed instruments.

Georg realized the privilege of entering the master’s workshop. During his three-year apprenticeship he received a thorough training, learning the specifics of French and Italian bow instruments, and repairing some of the violins used by the virtuosos of the time. The nature of work brought him in personal contact with outstanding musicians such as Ole Bull, Louis Spohr, and August Wilhelmj. Many years later, George would proudly list “Pupil of Vuillaume of Paris” on his professional letterhead.

August and Albert settled in Western Massachusetts in 1846 where they opened an organ building company in Springfield. August also acted as a violin maker. Georg joined them a year later (changing his name to George, but he would never drop the umlaut from his surname) and the three brothers embarked on a brief performing tour with a fourth musician (the group consisted of clarinet, violin, flute, and bass guitar), but the quartet was soon disbanded. 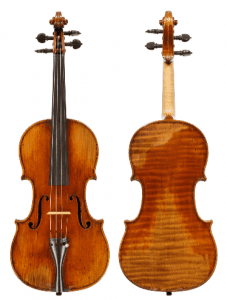 Whilst Albert and August returned to their Springfield workshop, George settled in Boston. There he began crafting American violins that met high standards, but conditions proved unfavorable for running a violin maker’s studio there. In 1850 he moved to the city of New York and established a workshop at 174 Ninth Street, Manhattan.

In a dynamic immigrant city with cultural ambitions, a taste for music, and strong memories of Europe, George was able to make the most of his skills and experience. The following year he learned that four instruments he had sent to London’s 1851 Grand Exhibition at Crystal Palace were awarded a first prize. The news of that honour lifted his career. New York took note.

Throughout the 1850s and 1860s he cemented his reputation as an outstanding violin maker. During these years he trained several apprentices, both American and German nationals. The sweet taste of success made him decide to buy a farm in Astoria around 1873. Now part of the Borough of Queens, the area was then a relatively remote part of Long Island inhabited mainly by German immigrants. He commuted daily from this residence to Ninth Street until 1874 when he moved his workshop to Astoria too. 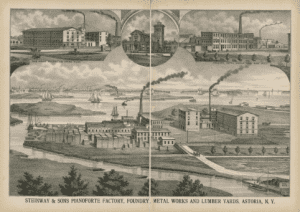 In doing so, he was most likely inspired by the piano producers Steinway & Sons. Managers of the company had purchased an expanse of land along the Bowery Bay in 1870 and moved their production facilities to Astoria, founding a workers colony known as “Steinway village” with a kindergarten, free library, bathhouse, as well as a park and athletic fields.

Whilst the move perfectly suited the large scale production demands and transport needs of a piano manufacturer, George’s business acumen let him down. Customers were not prepared to travel the distance between downtown Manhattan and Astoria to visit his shop. Although he maintained prestige for a top of the range selection, the majority of clients at the lower end of the market deserted him, leading to a significant decline in sales.

Dwindling income forced a return to the city upon him. In 1892 he opened a branch at Union Square which was run by his son George Jr., but the damage had been done. Clients did not return and the George Gemünder name drifted into oblivion after his demise in 1899 and the death of his son and successor in 1915.

From 1846, Albert and August had run their organ-making factory in Springfield. With business struggling, they joined George in New York in 1859. Five years later George and August had fallen out. Claiming to be the “real” Gemünder, August opened his own Manhattan shop in 1865, whilst Albert moved to Columbus, Ohio, where he continued to build organs for the rest of his life.

Despite the fact that his pieces were of lesser quality than those produced by his brother, August’s company enjoyed greater financial reward. When George settled in Astoria, August monopolized the Manhattan side of the business, importing historical Cremonese instruments, selling a wide variety of violins, and producing his own brand. In 1890 he changed the firm’s name to August Gemünder & Sons to incorporate his sons, August Martin, Rudolf, and Oscar. August Martin was an able musician who from 1892 edited Violin World, a periodical promoting their business with great success.

The firm stayed in business until Oscar’s death in 1946, exactly a century after the arrival of August and Albert in the United States. When the brothers finally settled in New York, they found few competitors. George in particular remained ambitious to compete with former rivals. By winning awards and distinctions in major European competitions, he proved conclusively that the United States offered conditions in which it was perfectly possible to continue the Italian, Austrian, or French traditions of making violins.

The characteristic “sound of New York” is the voice of a classic George Gemünder violin in which the work of luthiers from Cremona was continued by a master violin maker in Paris and communicated to a talented German artisan who brought his skills to Manhattan, becoming the ‘best violin maker’ in the United States. It is the sound of an instrument in which the blend of young American and well-aged European woods complement each other and harmonise, thus producing a soothing song of migration.