In the late 1950s, Veeder and Yelverton Pharmacy moved their thriving pharmacy business from Schenectady, NY to Route 50 in Burnt Hills, Saratoga County.

Driving along Route 50, most people today do not even know that an “old” commercial center ever existed.

For many years, even before the 20th century, the center of Burnt Hills – the commercial hub of the area, the meeting area for people from around the region, the transportation center – had been at the intersection of what is today Lakehill Road and Kingsley Road. This commercial center of Burnt Hills was along the route that came from Schenectady and traveled north to Saratoga and, even before that, the same route was used for the stagecoaches.

Johnson’s Store, a general store, was located in this central area and, within it, the Post Office. A barber shop was there. The flagpole, proudly displaying the American flag, was near the middle of the intersection (the flagpole at which all kinds of Halloween tricks occurred over the years). The Kingsley Inn, a stop-over for travelers, was on the northwest corner of the intersection and the building still stands today. A one-room schoolhouse, also still standing today, was just south of the intersection, and the entire area was surrounded by residential homes. A bit further south was the Doll Factory which later became Fo’Castle Farms fruit stand and country store. Residents from the areas surrounding this commercial hub would talk of “going to the hill,” ie., Lakehill and Kingsley, ie., Burnt Hills, to take care of whatever business they needed to do.

This was so obviously the center of Burnt Hills that the four roads coming out of that intersection at Lakehill and Kingsley were named by way of that intersection; they were known simply as North, South, East, and West Streets, each going in their respective directions.

But, that slowly changed. In the 1930s, Route 50 was built as a new, faster, more efficient way to get to and from Schenectady and to allow more travel between Schenectady and Saratoga. In 1950, the Burnt Hills Fire Department moved into a new building on Route 50 just north of Lakehill Road. At about the same time, the Burnt Hills Diner started serving people in this same area. A few years later, in 1958 the Veeder and Yelverton drug store was built in the growing business district. Endicott Johnson Shoes moved into a shopping plaza at Route 50 and Lakehill Road. This “new” Burnt Hills, was certainly becoming the commercial center attracting people from both the Town of Ballston and Glenville in Schenectady County.

By the 1970s, the businesses around this intersection grew even more numerous. The Burnt Owl, a craft store known throughout the area, opened. The Country Kitchen Restaurant, later to be known as the Olde Homestead, opened for business in the early 1970s. Both of these places were at this new, growing intersection. In 1972, a bit further south but still along the new growing Route 50 corridor, Grand Union established a store.

So it seems that the 1950s was when this intersection became the “center” of Burnt Hills in replacement of the former “center” at Lakehill and Kingsley. The recognition of that reality seems to be confirmed by the official use of the name “Burnt Hills Center” in 1969 for the shopping plaza that had previously been created at the intersection. All this growth, started in the 1950s, continued for over 20+ years.

However, with the exception of the firehouse, all of these establishments are no longer in business or in existence. Just as time changed the locale of the main business center, change continues to show its face today. 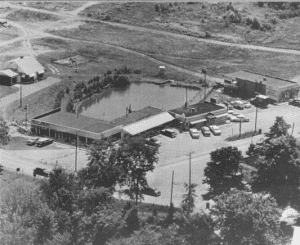 The new Burnt Hills intersection has seen its share of change in the last 20 or so years. The introduction of a CVS (actually doing business in different buildings at the same intersection over time) has changed the character of Burnt Hills. The closure of the Olde Homestead in 2006; the addition of an ice cream and food store, Mama’s, in place of what had been Pa’s Gas Station; and the 2022 demolition of a dilapidated gas station on the northeast corner of the intersection have all added to the ever-changing landscape of Burnt Hills.