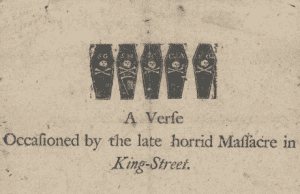 “The 29th Regimt on Duty. A Quarrell between the soldiers & Inhabitants—The Bells—Rung—A Great Number Assembled in Kingstreet A Party of the 29th under the Command of Capt Preston fird on the People they killed five—wounded Several Others—particularly Mr. Edw Payne in his Right Arm—Capt Preston Bears a good Character—he was taken in the night & Committed also Seven more of the 29th—the Inhabitants are greatly enraged and not without Reason.” – Diary of John Rowe, 5 March 1770

Unlike the quote above, penned by an eventual Loyalist, stating the facts, the poem “A Verse Occasioned by the Late Horrid Massacre in King-Street” propagandizes the events of March 5th, 1770 in Boston when soldiers fired into a crowd of rioting Bostonians. The event is now known as the Boston Massacre.

The poem was written in 1770 at a time when Bostonians and soldiers encountered news, gossip, judgments, and propaganda about the events in King Street. Purveyors of popular media enlisted the services of illustrators and poets to sway public opinion. Set forth in rhyming couplets, “A Verse Occasioned by the late horrid Massacre in King-Street” quickly announced its point of view.

It is still debated whether Captain Preston shouted “fire” with everyone in the crowd goading the soldiers to fire, and the town’s bells ringing, the latter usually a notice to leave your house and bring your fire bucket to help put out a fire. We may never know if Captain Preston ordered his men to fire on the crowd, and if so, whether or not they picked his voice out of the crowd.

“Then the people enraged some snow-balls did throw
To the Custom-House where they kept guard as we know,
Then the Captain commanded them to fire away,
And one of the Soldiers obey’d as they say.”

For more information and to view the full poem, visit the Massachusetts Historical Society, by clicking here.