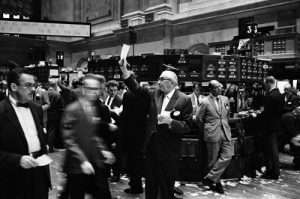 Alfred Winslow Jones (1900-1989) created the first hedge fund in 1949, but his motives may seem peculiar in retrospect.

This program will be led by David Huyssen, a U.S. historian and Visiting Scholar at the Free University’s J.F.K. Institute in Berlin. He is author of Progressive Inequality (Harvard U.P., 2014) and has taught history at Yale, Wesleyan, the New School, NYU, and the University of York (UK). His writing and commentary on capitalism and class relations have appeared in numerous U.S. and European venues — including the Los Angeles Times, BBC, Le Monde, and Deutsche Welle — and his latest academic article, “The ‘Background Conditions’ of the Hedge Fund in General Electric’s Schenectady” appeared in Transatlantica’s March 2021 issue. Huyssen grew up in New York.

This program will begin at noon, and will be held via Zoom. Tickets are $8, for free for Historical Society members. For more information or to purchase tickets, click here.