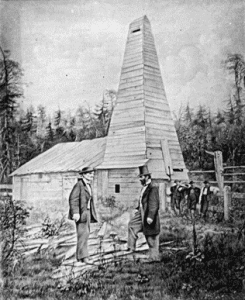 The Drake oil well drilled in Venango County, Pennsylvania in 1859 is widely known as the first oil well in America, however, many wells before the Drake well were producing petroleum oil.

Well drilling was common with many recent improvements by the time the Drake well was sunk, although most were drilled for salt brine (a source of salt). Oil was sometimes found in these wells and pumped as an unwanted by-product, but by the late 1800s, several changes made oil more valuable.

Whaling had been the primary source for illuminating oil (lamp oil), but whales had been over-hunted and were becoming scarce, and the cost of harvesting them was increasing. Also, by the 1850s, scientist had discovered the potential for manufacturing kerosene from crude oil which was found to be an ideal replacement.

Kerosene was not as smelly, would not spoil, and was cheaper to produce than whale oil. As a result, the Drake well was the first to be financed and drilled for the specific purpose of making a profit from pumping crude oil. The site was chosen because of oil seepages found on the surface in that area.

The success of the Drake drilling operation quickly became a financial model for the development of the booming oil industry that was to follow, especially as oil use was expanding to fuel the growing number of internal combustion engines that would soon power America.

Fast forward one-hundred-sixty-two years to the present when a local Town of Greenfield man, Clifford Young, was rummaging through his attic which contains remnants of many generations of his family’s history.

Clifford’s ancestor, Isaac Ormsbee, had been a whaler in Rhode Island before coming to the Town of Greenfield, Saratoga County in 1796, where he bought and ran a farm on what is now Ormsbee Road. (Issac made the trip on foot in seventeen days and recorded the experience in a personal diary.)

Isaac’s son, Russel M. Ormsbee, was one of eight children and eventually took over the family farm. Russel was a man of many talents and interests. In addition to farming and operating a sawmill, he became a surveyor and was involved in surveying a plank road and later a railroad that crossed the Town of Greenfield. Russel was also a traveler who often kept records of his travels which included excursions on the Erie Canal.

Clifford, who now lives in the Ormsbee farm house, appeared in my historian’s office recently with a thick folder filled with some of his ancestors’ personal papers that he had found in the house’s attic. As I thumbed through the folder, I saw the usual deeds, mortgages, bank statements, and wills that a family might save, but in the middle of the pile was a handwritten document on lined paper that caught my eye.

The neat handwriting began with the words, “Articles of agreement made and entered into between Russel M. Ormsbee & Alvin Day of the Town of Greenfield and John G. Savage & Titus D. Allen of the Town of Galway all of the County of Saratoga…to be partners together for the purpose having for in order to obtain Rock or Seneca oil on a lot of ground leased by the said above named parties from Edward Edmonds, Geo O. Chamberlain & Hiram Tompkins lying and being in Cornplanter Township, Venango County, State of Pennsylvania….” (Note that the lease was for land in the same county in Pennsylvania as the Drake well but located in an adjacent township just south of the Drake well.)

The agreement goes on to explain that the purpose of the agreement is for the, “…boring of two wells of the depth of 350 feet each if necessary to obtain oil….”

The agreement continues to explain that if oil is not found the agreement can be mutually dissolved, but if they should hit oil the partnership shall continue for the duration of the lease, and they shall share and share alike in all profits.

Ron Feulner is a retired science teacher presently serving as Town of Greenfield Historian. He is the author of “A History of Greenfield’s Mount Pleasant and the Glass Factory.”